Cholesterol and heart disease: Where is the science? 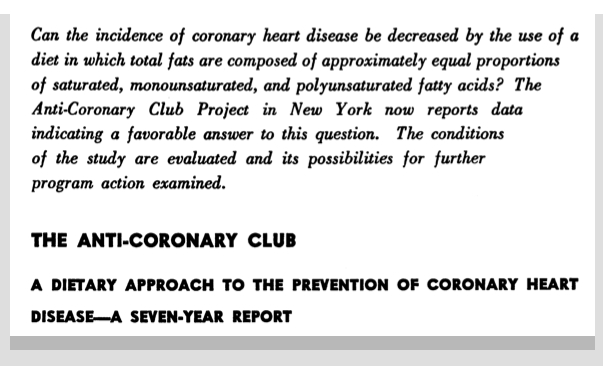 In 1957 one of the first studies testing the idea that substituting polyunsaturated fat for saturated fat in the diet would lower cholesterol and protect against heart attacks was launched in New York. The results of this study have foreshadowed the results of just about all the cutting-cholesterol-reduces-heart-disease studies since.
This study is one of my all-time favorites, because it was the first to show what every study has shown since: Subjects on such diets do reduce so-called risk factors, but they don’t reduce fatal outcomes. And as with all studies since, the researchers focused on the reduction of risk factors and not what really counts: whether the subjects live or die.
Dr. Norman Jollife, Director of the New York City Health Department, became convinced that the hefty intake of saturated fat common at that time was one of the driving forces in the development of coronary heart disease. He recruited about 1100 male subjects into a group he styled as the Anti-Coronary Club.
The subjects, some overweight, some not, followed what Dr. Jollife called the Prudent Diet. A similar group of men, who followed their regular diet, joined the study and acted as the controls.

A basic nutritional principal of the study diet is to provide approximately equal quantities of the three types of fats: saturated, polyunsaturated and monounsaturated. Beef, mutton or pork are limited to four meals per week, with the remaining meals comprised of poultry and fish, the latter consumed a minimum of four meals weekly. Butter and hydrogenated shortenings are replaced by high P/S ratio margarines and a minimum of one ounce of vegetable oil daily. Ice cream and hard cheeses are avoided. The diet contains about 30 to 33 percent of total calories as fat with a ration of polyunsaturated to saturated fatty acids of 1.25-1.50 to 1.
The overweight subjects were placed on a diet averaging 1,600 calories and containing 19 percent of the total calories as fat. When weight reduction was completed, this diet was changed to the standard study diet by the addition of one ounce of vegetable oil plus additional calories when needed from bread, nuts, fruits, and vegetables. 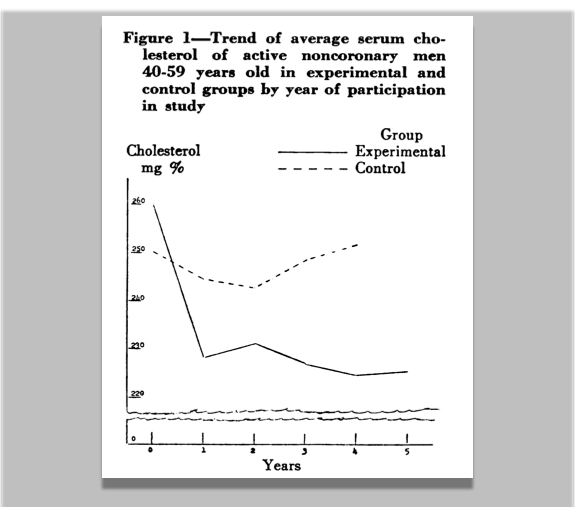 As you can see from the above graph, there was quite the difference in cholesterol levels between the study group and the control group. It’s interesting to note that the starting cholesterol levels for both groups was in the 250-260 mg/dl range, levels that would give today’s cardiologists hives. But those were normal cholesterol levels back then before the low-cholesterol frenzy settled in on us.
Over the course of the study, the members of the Anti-Coronary Club seemed to do well. Much better than Dr. Jollife, who died a few years into the study. But his colleagues took over and saw the study to its end.
Along the way, the researchers released interim results that caught the attention of the press.
The New York Times published an article on the study in 1962 and another in 1964. Both presented the studies as showing major health improvements in the intervention group following the Prudent Diet.
In February 1966, the paper at the top of this post appeared in the American Journal of Public Health. The article authored by Dr. Jollife’s colleagues was glowing in its description of the wonders of the Prudent Diet.
Then the Journal of the American Medical Association published a second paper on the results of the Anti-Coronary Club members and their Prudent Diet that wasn’t quite so glowing, though you wouldn’t know it by reading the abstract. This paper, Effect of the Anti-Coronary Club Program on Coronary Heart Disease Risk-Factor Status, written by the same authors as the previous paper, continued to put on a happy face about the long-term outcome of the study. But reading the actual paper instead of just the abstract reveals some statistics that don’t paint quite such a pretty picture.
Take a look at the abstract, paying particular attention to the part I’ve highlighted in yellow. 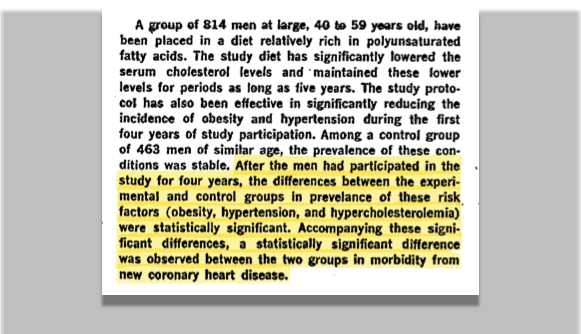 The yellow is an example of how the so-called science of these kinds of studies have been presented since.
You’ll notice how the authors play up the reduction in risk factors in the first highlighted sentence. The second highlighted sentence points out that not only are risk factors reduced but morbidity is reduced as well.
What does this mean?
Morbidity is a measure of the state of health as contrasted with mortality, which means death. So if morbidity is lower, as the abstract reports, that means the health of the group in question is better. In this case, the abstract refers specifically to those subjects who developed heart disease and what the authors are saying is that those on the Prudent Diet had fewer symptoms and weathered the disease better than those on the standard diet.
Which sounds great, but that isn’t the whole story.
If you dig into the body of the paper, you’ll find some troubling statistics. In the study group–the ones who followed the Prudent Diet–there were 26 subjects who died during the study, while only six subjects died from the control group. It gets even worse when you look at heart disease, the very problem this diet was designed to prevent.
Eight subjects from the Anti-Coronary Club died of heart attacks, but not a single member of the control group died of heart disease.
These statistics are not easy to find. Below are the highlighted sections containing the above stats. You can see for yourself how hidden these devastating statistics are. They are on two different pages of the paper, so it takes some real digging to tease these numbers out. 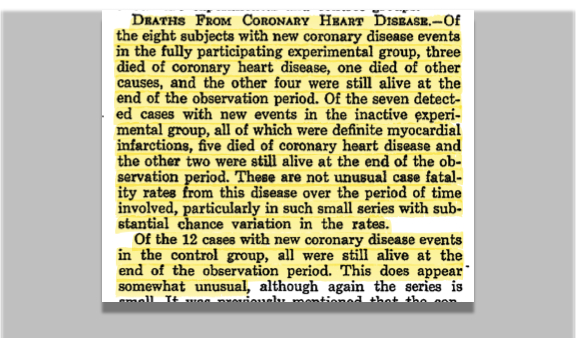 Letting these numbers recede into the background while touting the reduction in risk factors has become the protocol adopted by many papers subsequently published.
The Anti-Coronary Club paper was the first, but many similar papers have followed in its footsteps. In the years since, various funding agencies have spent hundreds of millions of dollars on studies trying to show that reducing cholesterol brings about good things. What these kinds of studies often hide in the fine print is that reducing these risk factors doesn’t really make people live longer.
And this type of obfuscation annoys me to no end.  I’m always happy to discourse about it to anyone who will listen and I recently did so on camera with Dr. Maryanne Demasi of Australia’s ABC network.
Most of the readers of this blog have probably seen the two Catalyst episodes that recently ran and went viral. If not, click on the links to see Heart of the Matter Part 1 and Heart of the Matter Part 2.
I was interview extensively for these programs, and, due to time constraints, a lot of the interview was left on the cutting room floor.
Here is some of that footage, specifically dealing with these cholesterol studies and their outcomes. And in it, me, doing my best to bite my tongue to keep it civil.
[vimeo]https://vimeo.com/79066048[/vimeo]
If you’ve read The Protein Power LifePlan, you’ll notice in the background of the shot the giant Cave Bear skull I wrote about in the opening paragraphs.
In case you’re wondering what book I was reading about the creation of the atomic bomb, it was Richard Rhodes The Making of the Atomic Bomb.  If you want to read about how science is really supposed to be done, and learn something of the gripping history of that time and even a bit of physics, grab a copy.  You won’t be disappointed.
If you would like to see the extra material from the other people interviewed for these Catalyst shows, take a look this Special Edition of the Heart of the Matter.
This series of shows has created a firestorm in Australia with the statinators coming unglued.  It’s been great fun to participate.