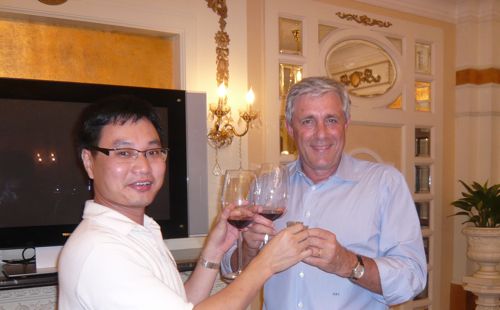 After our meeting at the factory we’re working with, the president of said factory treated us all to a feast at our restaurant.  As Chinese tradition dictates, such feasts are accompanied with many, many toasts.  The toast works this way:  the person making the toast picks out a specific person to toast, walks over to that person, raises his/her glass and gives the toast.  The translator translates.  The person receiving the toast answers back.  The translator translates back.  Then both toaster and toastee down drinks in one swallow.  After this, the glasses are immediately refilled by one of the servers.

In our case, the liquor used for toasting purposes was either red wine or bai jiu, a Chinese white wine that is actually more of a distilled liquor.  The Chinese love bai jiu, which has a distinctive flavor.  It’s about 50 percent alcohol and has a front end taste that is kind of like the essence of an infusion of dirty socks in some sort of floral alcohol and a back end like lighter fluid.  It’s an acquired taste, and one that I had sort of acquired after a zillion toasts.

The meal we had was spectacular. And pretty low-carb.  I kept a photo log of it, which I will lay out below. (We had another good meal earlier in the day that MD posted about moments ago.)

We started with shark fin soup, which I didn’t take a picture of because…I don’t have a good reason.  I just didn’t.  I guess I didn’t think about taking photos until after the shark fin soup.  From there we moved on to a giant prawn and an abalone.  Both were delicious, especially the abalone.  I don’t know what kind of sauce it was cooked in, but it was savory and out of this world. 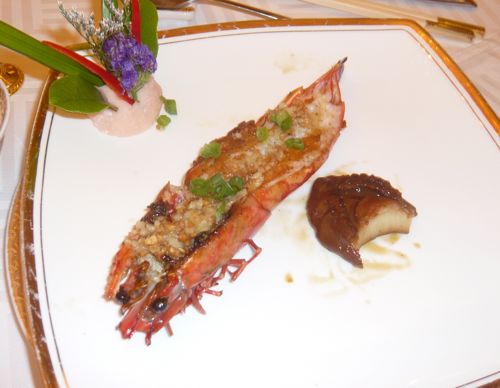 Then came a weird dish that was served with plastic gloves.  It was a baby dove with head included.  You put the gloves on and tore the little bird to pieces and gnawed the bones.  And, yes, we ate the head.  We didn’t just throw it back and chomp it; we nibbled off the small amount of meat on it .  I watched the Chinese so I could follow suit, and that’s what they all did.  After picking the bones clean, we all removed our gloves and awaited the next course. 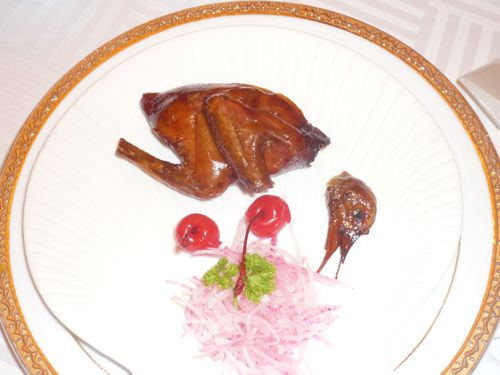 What came then was some sort of seafood salad.  And remember, all this food was interspersed by dozens of toasts. 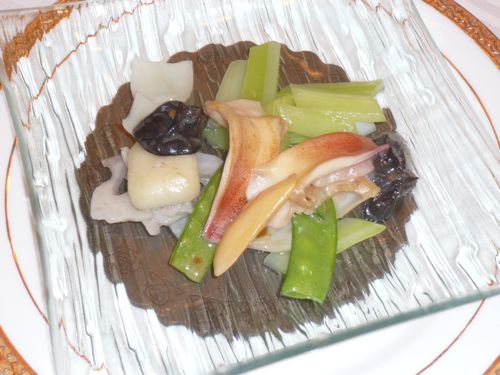 After the seafood salad came the main course, which was a piece of succulent steak that was extremely tender.  It was served with a little pile of fried garlic chips and a stalk of broccoli. 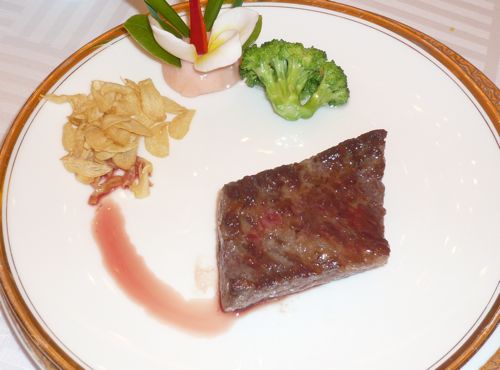 Following the steak, we had a dish of some kind of green vegetable.  I never could figure out what exactly it was, but it was very tasty.  I asked the woman sitting next to me what it was, but she didn’t know the English word for it.  All she could tell me was that it was grown in the area where we were. 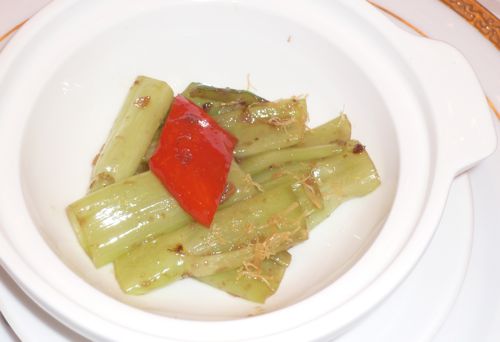 Then came a tiny bowl of fried rice.  You can see the size of the bowl by comparing it to the spoon next to it and the little glass the bai jiu is served in. 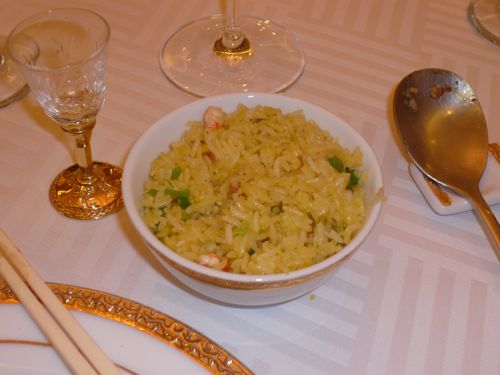 The we had some sweets, which I admit to eating.  Everyone of them.  By that time, after all the wine and bai jiu, I would have eaten anything. 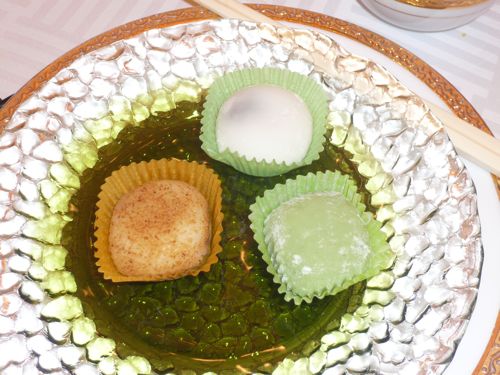 And finally we were served a small plate of fruit for the end of the meal. 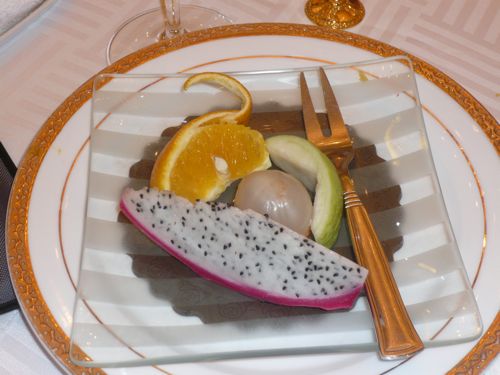 By that time all the wine and bai jiu were gone, thank God.  I thought we had made it through the worst of it, but the factory president, who was the founder of this feast, had brought two kegs of German beer, so nothing would do but that we all traipsed upstairs to a small room and drank glass after glass of mildly chilled beer and ate dried squid, squid jerky, I guess you could call it.  The beer and squid were served along with, believe it or not, french fries.  I ate no fries, but did eat a fair amount of the squid jerky, which was pretty tasteless but did give the jaws a good workout.

It was a memorable evening, and I can even remember all of it.  I even woke up the next morning feeling fine.

I’m rushing to get everything together to catch our flight to London.  I’ll post later on my thoughts on the China and Hong Kong experience. I do want to make one observation, though.  Earlier in the day that this feast took place, we toured the factory.  There were probably at least 400 people working there of all ages.  I didn’t see a single obese person – all were thin.  You may think that they weren’t obese because they were working hard.  You would be wrong.  Almost all of them had fairly sedentary jobs.  They were sitting doing very little strenuous labor.  Mainly just screwing one component on to another as they came down a line.