Breakfast at the Squeeze In

Share0
Tweet0
Share0
If you ever make it up Lake Tahoe way, make sure to have breakfast at the Squeeze In, a little restaurant in Truckee, California.  MD and I run over to Truckee at least once a week for our Squeeze In hit, and this week was no exception.  After voting on empty stomachs we drove to Truckee, an old railroad town about 13 miles from our house and a stone’s throw from where the Donner party holed up for the winter of 1846/47 and ate one another.
The Squeeze In, as you can see from the photo above, is a tiny hole-in-the-wall restaurant ‘squeezed in’ between a number of other businesses on Truckee’s main drag.  It doesn’t have many tables, and there is often a wait, but the breakfasts are out of this world.  Especially the omelets, which are world class. And huge.  MD and I have our favorites, but yesterday we decided – in honor of the Donners, perhaps – to be adventurous.  We each selected an omelet that we had never had, and were rewarded for our culinary courage.  And selecting omelets is no easy task at the Squeeze In because there are at least 80 of them, and all of them are good.  (If you go to their website you can take a look at the menu, which is old.  They have at least double the number of omelets now that they did when this menu was put up.  In fact, the omelets that we had aren’t even on their menu from the website.  In case you’re wondering, MD usually has the Racy Tracey and I have the Dierdoni.)
Along with outstanding omelets, the Squeeze In makes the best mimosas we’ve ever had.  They start with glasses kept in the freezer, ice cold champagne and – best of all – very little orange juice.  Just enough to provide a little flavor and a slight amount of color.  After our heavy day of voting, we each needed two.  Here is what they look like. This one looks more orangy in the photo than it really is.  They are almost pure champagne. 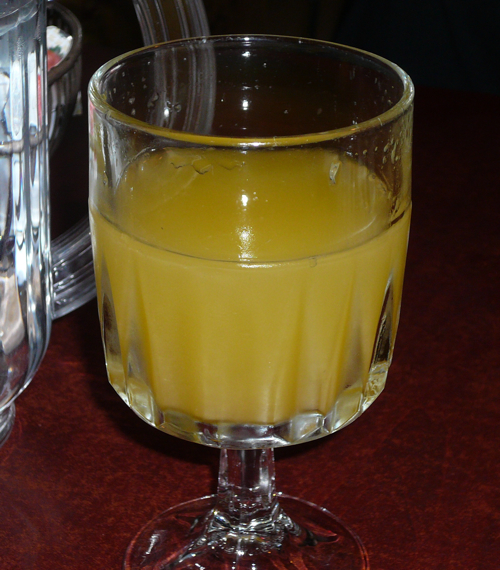 For my omelet selection, I picked the Juanderful, which was stuffed with bacon, artichoke hearts, zucchini and sour cream.  I substituted fruit for potatoes.  The other stuff you see is a tomato pesto and a mushroom sauce in the little cups and salsa in the large cup.  The bread came with it – I left it uneaten.

Just so you can see the way these things are made, here is a photo of my omelet half eaten.  You can see that it was filled with large chunks of zucchini, artichoke heart halves and substantial pieces of bacon.  A real low-carber’s treat. 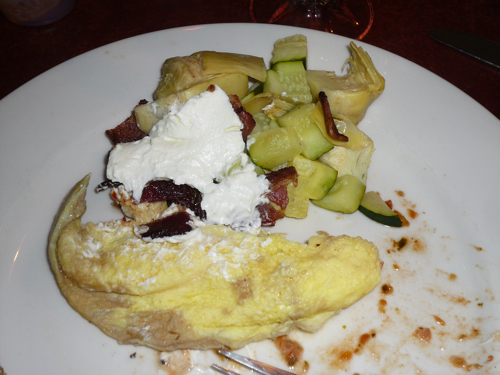 MD ordered the Straight Eddie, which was filled with bacon, sausage and mushrooms.  She substituted the fruit for potatoes (we usually substitute tomato slices, but not at this time of the year) and left her bread uneaten.  She left half of her omelet uneaten as well.  She took it home in a box and ate it later. 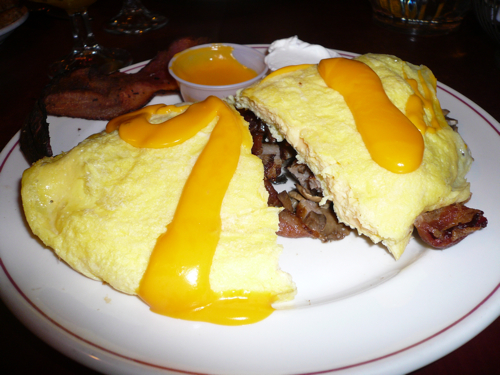 As we ate, the snow came down.  Here you can see the view from our table through the door outside.  The black car you see (Volcano black, to be precise) is our venerable 1998 Audi A6 that will drive through anything.  When we came up a few days earlier, it was snowing like crazy as we climbed the grade up I-80.  We came upon five different chain stations (places where they make you put on chains before they will let you continue on).  There were cars and trucks stacked along the side of the freeway with their drivers mucking around in the freezing cold putting on chains. But when the officials would come out of the little huts, they would see our Audi and wave us through.  It’s been the single best car we’ve ever had in our entire married career. 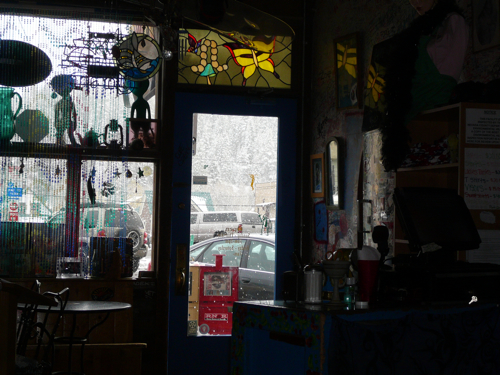