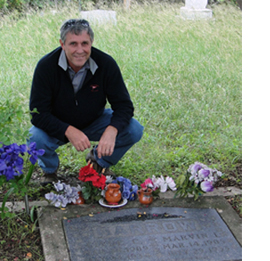 You can see me in the photo at the left kneeling by a headstone in a forlorn, weed-infested graveyard in a bad part of Dallas, Texas.  The remains below that headstone are none other than those of Clyde Barrow, the male half of the notorious duo who ravaged the the southern states in the late 1920s/ early 1930s, and who were made famous to our generation by the hit movie Bonnie & Clyde, starring Faye Dunaway  and Warren Beatty.  In real life, just as in the movie, Bonnie and Clyde drove into an ambush in rural Louisiana where they met their ends in a hail of bullets on May 23, 1934.
How I came to be in this dreary place on a rainy day started with a story my dad told MD and me on our last trip to visit the folks in Michigan.  I can’t remember now how it came up, but he started telling us about the time he saw the remains of Adam “Eddie” Richetti, the sidekick of Charles Arthur “Pretty Boy” Floyd in a funeral home in Bolivar, Missouri.  My father grew up on a farm near a little town called Halfway, which is ‘halfway’ between Bolivar and Buffalo.  For the folks in Halfway, Bolivar was the closest ‘big’ town where everyone went to shop.  At that time, Halfway was basically a wide spot in the road. 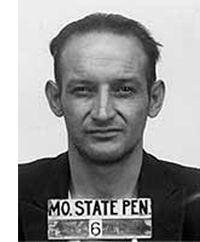 In June 1933 ‘Pretty Boy’ Floyd and Adam Richetti (shown at right) stopped off to get their stolen car fixed at Bitzer Chevrolet where Richetti’s brother, Joe, worked as a mechanic.  As they were cooling their heels there, the Polk County Sheriff, William Killingsworth, who lived in Bolivar, wandered in.  My dad didn’t know if he just happened in or if he had heard the gangsters might be there.  I suspect the former since he didn’t come in with guns drawn.  Floyd and Richetti took him captive at gun point, took Joe’s car and lit out for Kansas City.  Along the way they ditched Joe’s car, stole another vehicle, switched their hostages (they had collected another along the way) over, and kept on traveling.  Before they reached Kansas City, they let Killingsworth and the other hostage go by the side of the road, and drove off.  They reached Kansas City, and there was where the story went murky.
At the same time Floyd and Richetti were driving to Kansas City, unknown to them, an escaped fugitive was on his way there as well.  Federal agents had captured Frank Nash, an escapee from a federal prison, in a store in MD’s home town Hot Springs, Arkansas.  The agents drove him from Hot Springs to Fort Smith, Arkansas where he was passed off to other agents who took him aboard a train bound for Kansas City.  Upon arrival there, other agents arrived to transport him to the jail.  As they were getting out of the car, they were fired upon by men who jumped out of a green Plymouth parked nearby.   Nash and several of the lawmen were killed in the gun battle.
These murders took place right outside of Union Station in Kansas City and came to be known as the Kansas City Massacre.  Prior to this event, federal agents were unarmed.  As happens so often after many such tragic events, legislators stampede into making laws that are sometimes not well thought out.  In this case they decided to pass a law authorizing federal agents to carry arms, and, in the process, made J. Edgar Hoover, who then commanded a national police force of armed agents, the most powerful man in the country.
With virtually no evidence on hand, the feds put it out that Floyd and Richetti were behind the Kansas City Massacre.  By the time this announcement came out, the two were shacked up in Buffalo, NY with a couple of molls.  When they got wind that they were the suspects, they grabbed their girls and took off for Oklahoma.  On the way their car broke down in Ohio.  While there, local lawmen captured Richetti, but Floyd escaped only to be gunned down a couple of days later.
Richetti was convicted of aiding and abetting an escape and was sentenced to two years in the federal pen.  But, more seriously, he was also convicted of murder by the State of Missouri for his alleged part in the Kansas City Massacre.  Although there was virtually no evidence linking either Floyd or Richetti to the event, Richetti was sentenced to the gallows.  Instead of hanging, however, he got the dubious honor of becoming the first person to be executed in the new gas chamber at the Missouri State Penitentiary.  After he was gassed, his body was sent to his brother in Bolivar and Richetti was finally laid to rest in a cemetery in Bolivar.  During the viewing at the Boliver funeral home, my dad was one of the many people who lined up to see Richetti.
After my dad told me this story, I did a little online searching to see what I could find about Richetti and Floyd, and during my search, I came across information about other famous gangsters of the time.  I discovered that both Bonnie and Clyde were laid to rest in Dallas, Texas after they were gunned down in Louisiana.  I knew I was going to be in Dallas for our oldest grandchild’s grandparent’s day at school, so I decided to track down the final resting places of the infamous duo.
I discovered Bonnie had been laid to rest in a cemetery quite close to our son’s and DIL’s house.  Bonnie Parker now resides in the Crown Hill Memorial Park, which is at the intersection of a couple of busy Dallas streets.  MD and I set out on a gloomy, rainy day underneath a sullen sky to find her.  With our never-travel-without-it GPS device, it was easy to find the cemetery, but took some time to find Bonnie’s grave.
The Crown Hill Memorial Park is a nicely kept cemetery and is large – at least if you’re looking stone by stone on a chilly rainy day for one in particular.  After about 45 minutes of searching, we found Bonnie’s headstone tucked in behind a hedge.  In the photo below, her stone is about halfway down the left side of the long hedge in the Sunset Garden section of the graveyard.

Bonnie’s mother was most surely responsible for the wording on Bonnie’s headstone and is buried next to Bonnie.  In fact, it was Bonnie’s mother’s stone I found first because it stands up a little more than Bonnie’s and wasn’t covered with dirt.

When I finally did find Bonnie’s marker, I had to sweep the dirt off of it in order to take the photo.  As dirty as it was, it’s a wonder I was able to find it.  As you can see from the inscription on the headstone, to her mother, Bonnie wasn’t the vicious outlaw she was in reality, but was Mamma’s little girl.  Which, I suppose, is as it should be. 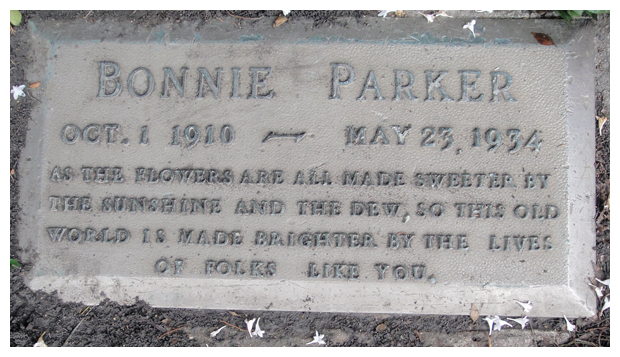 I wonder how many of the people Bonnie terrorized, robbed and maybe even killed would share the sentiments her mother put on her stone?
After visiting Bonnie’s grave, we fired up the GPS and headed for Clyde’s final resting place.  Our trip took us to a pretty dicey part of Dallas.  I don’t know what it was like in Clyde’s day (probably not much different, I would imagine), but today his cemetery is in a neighborhood of falling down homes and jacked up house trailers all in various states of disrepair.  The area is being encroached on all sides by various industrial operations.
The Western Heights Cemetery, Clyde’s place of interment, is as rundown as the area in which it exists.  It was the perfect cemetery to roam through on a gray, chilly day.  As you can see from the photo below, the graveyard is overgrown with knee high weeds and looks like the perfect setting for some kind of Halloween horror movie.  We had to pull the car off of a busy street onto a muddy, rutted road with a chain across the entry way.  It was a new chain, which asks the question: what happened to the old one? 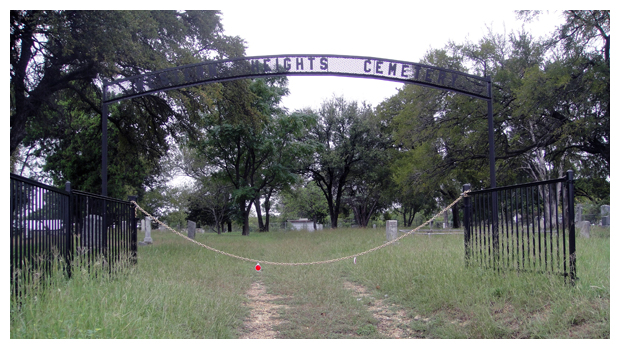 Although the Western Heights Cemetery is much smaller than the Crown Hill Memorial Park, it took longer to find the grave we were searching for because of the overgrowth of weeds.  We finally found it near the edge of the graveyard overlooking the busy street we had come from.
As you can see from the headstone Clyde is buried next to his brother Marvin, aka ‘Buck,’ who was gunned down by lawmen about a year before Clyde.

Due to the overcast day, it was difficult – even with a flash – to get good contrast on the photo of the headstone (which, like Bonnie’s, was also covered with dirt and had to be swept clean).  The sentiment – Gone but not forgotten – isn’t nearly as from the heart as is the one on Bonnie’s stone.
The Western Hills Cemetery must be the final resting place of the entire Barrow clan because there were at least a half dozen Barrow stones all in the same area.
What had never occurred to me until I found these graves and subtracted dates is how young these two people were. Bonnie wasn’t quite 24 and Clyde had just turned 25.  Because of the movie and their legend and larger-than-life status, it’s hard to believe that basically they were just kids.  Mean kids, no doubt, but still, just kids.  I guess much like with people who get involved with gangs today, those who chose gangsterism as a career in the early part of the 20th century didn’t need to worry about saving for their pensions either.