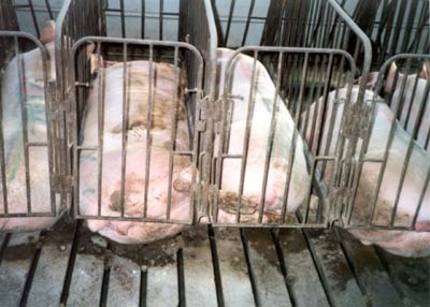 I’m a meat eater. I love meat. I firmly believe that meat is the most nutritious food available, providing the best nutritional bang for the buck we can get. As a meat eater with a conscience I understand that the animals that provide me with the majority of my calories make the ultimate sacrifice to do so. I believe we should all strive in whatever way we can to make this ultimate sacrifice as humane and painless as possible.
But not only should we work to ensure a humane slaughter, we should also work to ensure that these animals aren’t forced to live out their lives in wretched conditions. To this end, the banning of gestation crates for sows is long overdue.
An editorial in today’s New York Times spells it out:

Of the 60 million pigs in the United States, over 95 percent are continuously confined in metal buildings, including the almost five million sows in crates. In such setups, feed is automatically delivered to animals who are forced to urinate and defecate where they eat and sleep. Their waste festers in large pits a few feet below their hooves. Intense ammonia and hydrogen sulfide fumes from these pits fill pigs’ lungs and sensitive nostrils. No straw is provided to the animals because that would gum up the works (as it would if you tossed straw into your toilet).
The stress, crowding and contamination inside confinement buildings foster disease, especially respiratory illnesses. In addition to toxic fumes, bacteria, yeast and molds have been recorded in swine buildings at a level more than 1,000 times higher than in normal air. To prevent disease outbreaks (and to stimulate faster growth), the hog industry adds more than 10 million pounds of antibiotics to its feed, the Union of Concerned Scientists estimates. This mountain of drugs — a staggering three times more than all antibiotics used to treat human illnesses — is a grim yardstick of the wretchedness of these facilities.
There are other reasons that merely phasing out gestation crates does not go nearly far enough. Keeping animals in such barren environments is a serious deprivation. Pigs in nature are active, curious creatures that typically spend 10 hours a day foraging, rooting and roaming.
Veterinarians consider pigs as smart as dogs. Imagine keeping a dog in a tight cage or crowded pen day after day with absolutely nothing to chew on, play with or otherwise occupy its mind. Americans would universally denounce that as inhumane. Extreme boredom is considered the main reason pigs in confinement are prone to biting one another’s tails and engaging in other aggressive behavior.

When I was growing up I spent a lot of time on my grandfather’s farm way out in the country in southwest Missouri. He raised hogs and chickens and had a herd of dairy cattle that he milked twice a day. All the animals had plenty of pasture and were well treated. The hogs (there were probably 10 or 12 at any given time) had about an acre or so of space that they roamed around it. The area–except for the trampled ground around the feeding troughs–was in waist-high grasses that the hogs made paths through and rooted around in. The hogs, as far as I can remember, never bit off one another’s tails and weren’t particularly aggressive. They spent most of their time either laying in the shade of the several trees that were sprinkled throughout the lot or nosing around here and there in the grass. As far as I’m concerned, this is how hogs should be raised. I’m sure it makes for a better quality of meat; I’m also sure it is much more expensive. But how much is it worth to ensure that the meat you consume comes from humanely raised and slaughtered animals. I guess it’s a personal choice, but for me, it’s well worth the additional expense.