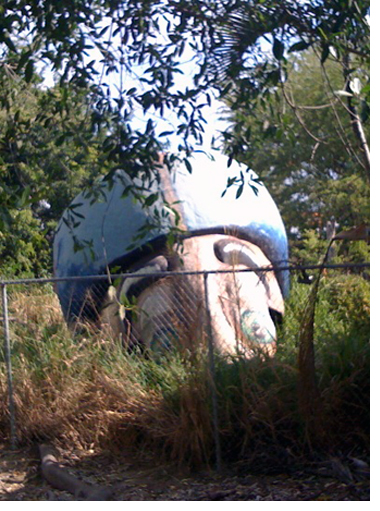 Im just getting back to my desk after a several days in Puerto Vallarta, Mexico.

I had a little R & R, played some golf, and just enjoyed myself in general.  Had all the same kinds of food I wrote about in a post last year, so I returned well fed.  Now Im tanned, fed, fit and ready to type, so its back to the grindstone.

Thanks to the poor economy, this trip was a little more exciting than previous trips.  At least the golf part.  When we pulled the carts up to the first green on the first day we played, the caddy told us to pull off the cart path and park the carts down by the green.  When we asked why, he replied, Banditos.

Turns out that hard times have driven many desperate people to turn to crime to feed their families.  According to the caddy, banditos hide in the jungle along side the cart paths and come out while the players are on the green and steal anything they can get their hands on.  A few weeks before we got there, there was an actual armed robbery on the course.  Fortunately, our trip was without incident, so I returned home with all my belongings.  Didnt even lose anything to the airlines, which is probably a more likely way to lose valuables than to banditos on the golf course.

Aside from banditos, there are other dangers on the courses in Mexico.  I took the photo of this guy shown below as I drove by him in the golf cart.  Anywhere there is water on the Marina Vallarta course, there are crocidilos lying about.  Youve also got to keep an eye out for snakes whenever you hunt for lost balls in the jungle bordering the courses.  And there are iguanas everywhere.

One of the things I like about Mexico is always coming upon the unexpected.  The giant head in the photo above was half buried in the ground just off the tee box of one of the holes.  I caught a glimpse of it through the trees and couldnt figure out what it was.  I walked around and through the brush until I could see it and snapped a photo with my iPhone.  What is it?  A football player? Why is it there in the middle of nowhere?

While I was south of the border my web guy was hard at work, which is a nice segue into a couple of blog housekeeping issues.  Those who read the comments have discovered that my comments are now up in a salmon color.  And my tech guy has installed a plug in so that I can answer specific comments and end up indented right below them so that I dont have to use the @[insert name] business.  Anyone who wants to reply to a specific comment or even to a reply to a comment can do so by clicking the blue highlighted Reply.

This makes the entire process much, much easier for me, and will help – I fervently hope – me to keep up with the comments in a more timely fashion.

At long last the 6-Week Cure blog is finished.  All I have to do is have the tech guy click it on and you will be able to click on it from the menu at the top under Blogs.  All it is right now is an empty template.  MD and I have to populate it with a little content before it goes up.  Im hoping it should be up with some content within a week.

Im having trouble getting MD to focus on anything but the wretched Choral Society (of which she is the president) right now because of her big event coming up in about ten days, so if there is going to be content, Ill have to create it.  And Ive got a lot of other posts I want to do that arent 6-Week Cure posts.

MD has been working on an extravaganza that will be performed on Feb 13th and 14th in Santa Barbara that may well be the social event of the season.  Ill post more on it as the time draws nearer, but just to give you an idea as to whats going on, her group is singing the world premier of a choral piece written by Sir George Martin (yes, he of The Beatles fame), and, as it turns out, Sir George himself is coming from London to conduct it.  Along with the choral piece, Sir George will conduct the chorus in a version of Eleanor Rigby that he scored as a choral piece.  The rest of the performance will be Beatles tunes scored for chorus accompanied by a world premier ballet choreographed for this occasion.  So, she has a lot of work to do to pull this all together.  I suppose Ill cut her some slack in the blog-content-creating department. At least until Feb 15.

As for my own content on this blog, the next post will be the long-awaited and promised post examining and critiquing Anthony Colpos Fat Loss Bible.  It will actually be a two-part post with the first part devoted to showing the errors of Anthonys thinking vis a vis the metabolic advantage, and the second will be an in-depth look at a famous paper that Antony has dismissed out of hand but which, as you shall see, is really a brilliant study.  With these two posts, Ill put paid to Anthony Colpo and hope to never mention him again.

Ive been so busy lately that I havent posted a lot, but that doesnt mean I havent been thinking about posting.  Ive got a number of things Ive been wanting to write about that  I plan to have up as soon as the Colpo deal is finished.  I want to add my two cents worth on a bunch of the problems some Paleo dieters seem to develop.  And Ive got a post cooking on the thyroid and iodine.  One on fructose, and one on saturated fat.  Plus the analysis of the next stupid study that will inevitably pop up and seize the imagination of the mainstream media types who will shout it from the rooftops.