Back at last from a long multi-city trip 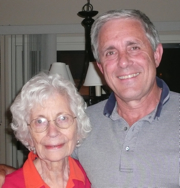 Mom and Mike
MD and I got back a couple of days ago from a long trip that took us from Santa Barbara to Texas to Maine to Michigan and finally back to Santa Barbara. We had some business to do in Maine and we couldn’t get that close to Michigan without stopping to see my folks whom we hadn’t seen in almost two years. It was great to see them and to see my two sisters who also live in nearby. What with all the visiting and all I didn’t really have the time to blog.
Along with the visit we had a lot of good food. As you can see from the photo below of my breakfast plate, Mom hasn’t lost her ability to make perfect fried eggs over easy. Nor has she lost her ability to make the best carrot cake imaginable, but we won’t go into that. 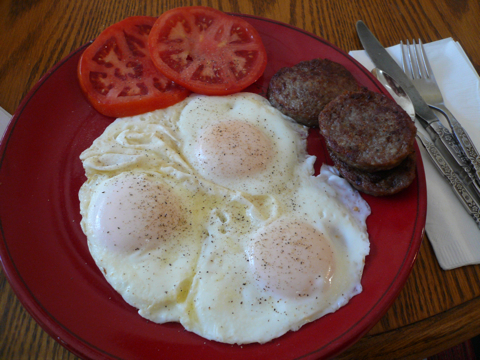 Once we got back, we were inundated with calls from everywhere wondering if we were safe from all the fires raging through Southern California. We are. Although the upper end of the fire is in Santa Barbara County allowing the talking heads to claim that fires are burning from Santa Barbara to San Diego, we are not in danger at this point. And thank God the high winds have finally stopped, making the fire fighting much easier.
As we flew in I took a few pictures of the fire from the plane. The one below was taken from the left side looking toward San Diego. The one below that was taken from the right side showing the fire below the plane. 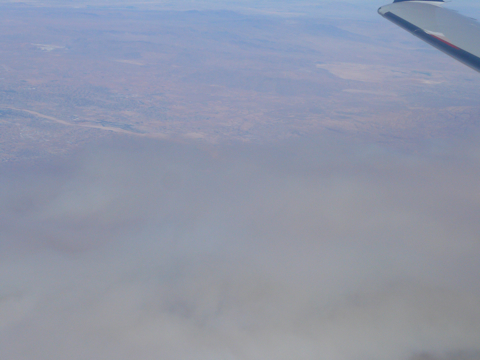 Speaking of flying… We flew US Air for every leg of this trip save one, and all the flights went like clock work. I started this journey with great trepidation because it required us to make seven different flights. I figured just the law of averages (not to mention my lousy luck with the airlines lately) would militate that at least on leg was screwed up. But such wasn’t the case. Maybe my luck is changing.
Along with fielding all the phone calls about our safety that we received after returning, I had a major project to complete, which also kept me from my computer. I just put the finishing touches on it moments ago, so I can now devote some time to the blog.
I forced myself to go through and delete all the zillions of spams that had come in during the big spam blast I wrote about a couple of weeks ago. Within those zillions of spams were sprinkled valid comments that I plucked out, some almost two weeks old. These added to the ones that have come in over the past couple of days put the total to a little over 50. I will not go to bed tonight until they are all posted.
If you’ve had a comment languishing, you should see it by the end of day. If you don’t see it, you should resubmit because it probably got deleted during my great spam deletion. If so, I apologize. The new system now installed requiring the typing in of a series of letters and/or numbers has reduced the new spam to virtually zero. I know it’s a pain to use, but it saves me at least 30-45 minutes every day in not having to go through the spam one by one, making sure there isn’t a comment buried in there.
Thanks for your patience while I was AWOL.