Virtually all of the results presented in medical studies are displayed as ‘average’ or ‘mean’ values. I’m sure everyone knows how to come up with an average or mean (the two are synonymous) value for a group of data points is to add them and divide the sum by the number of data points analyzed. For example, if you are a teacher, and you want to find out the average score on a test you gave to 30 students, you would add all the test scores together and divide by 30. You would then have the ‘mean’ or ‘average’ score of the students in your class.
Most medical papers list the mean values of whatever is being studied. If the researchers are trying to determine whether or not an experimental weight-loss therapy works, they add the weight lost by all the subjects participating in the study then divide by the number of subjects. The number they get is the ‘mean’ or ‘average’ weight loss brought about by the therapy being tested. It all sounds pretty reasonable and scientific, but is it really?
It would be realistic if we were all average people. But we’re not. And averages don’t represent us all that well. In fact, if you think about it, the average American would have one breast and one testicle.
Averages don’t always represent the true findings in a scientific experiment, either. Let’s look at an example to demonstrate. Let’s say we are testing a new weight loss regimen on 10 people. We start these people on the program, keep them on it for three months, then evaluate. When we look at the numbers we find the following results:

If you add these numbers up and divide by 10 you find that the average or mean weight loss for the group is 1.6 pounds, which doesn’t seem like a lot. But if you look at the data itself instead of the average, you see that most of the people lost around 4-5 pounds. In fact, assuming these numbers to be accurate, if you went on this same regimen, the odds are that you would lose 4-5 pounds instead of the 1.6 pounds that the ‘mean’ of the data would predict. You could also gain 12 pounds, but that would be unlikely (a 1 in 10 chance). This is the problem in simply looking only at average values and not the data as a whole.
Another way to look at this data is to calculate the median, which is basically the midpoint within the data set, i.e., the point at which half of the subjects are above and the other half below. You can do this by arranging the data in ascending or descending order and finding the midpoint by lopping off from both the top and the bottom until you get to the middle.
If we do this to our data, it looks like this:

We can see that the median falls between 3 and 4 or 3.5. So in this experiment the mean (average) weight loss is 1.6 pounds, the median is 3.5 pounds, about twice what the mean is. But if you look at the actual weights lost you can see that most clustered around the 4-5 pound level. You can see that the results of our experimental weight-loss regimen look different depending upon how they’re reported.
It works this way in the real medial literature as well.
Let’s look at a study from a couple of years ago (full text pdf) that many people have used to ‘prove’ there is no metabolic advantage and to ‘prove’ that a calorie is simply a calorie irrespective of its macronutrient composition.
Boden et al studied 10 overweight patients with type II diabetes in metabolic ward for 21 days. During the first 7 days the subjects were allowed to follow their regular diet (the control) and were switched to a low-carbohydrate diet (21 g carb/day) for the next 14 days. During the course of the study, numerous parameters were evaluated, including fasting glucose levels, insulin sensitivity, HbA1c, weight change, caloric intake and energy expenditure.
After the 14 days on the low-carb diet subjects lost weight and markedly improved in all parameters measured. Blood glucose levels normalized, HgbA1c decreased from 7.3% to 6.8%, insulin sensitivity improved by about 75%, triglycerides dropped by 35% and total cholesterol fell by 15%. Pretty dramatic results for only 14 days on the low-carb regimen, I would say.
The subjects lost weight as well. They lost an average (mean) of 3.63 lbs (1.65 kg) while decreasing their food intake from 3111 kcal/day to 2164 kcal/day, a decrease of 947 kcal/day. Multiplying 947 X 14 gives us a total caloric deficit of 13,258 kcal. If we divide this number by 3500, the kcal in a pound of fat, we get 3.79, which is the amount of fat that should be lost simply from the caloric deficit. And which is pretty close to the actual 3.63 lbs actually lost. The difference is insignificant, so it really is, as they say, close enough for government work.
The authors of the study conclude that irrespective of all the other markedly positive benefits of the low-carb diet, the “weight loss…was completely accounted for by reduced caloric intake.” In other words, there is no metabolic advantage to a low-carb diet. Weight lost simply occurs because the satiating effects of the low-carb diet bring about a spontaneous reduction in calories.
But is that all the story here? Not really. Let’s see why.
Below is a chart from the study showing graphically what happened to caloric intake and weight during the course of the experiment. 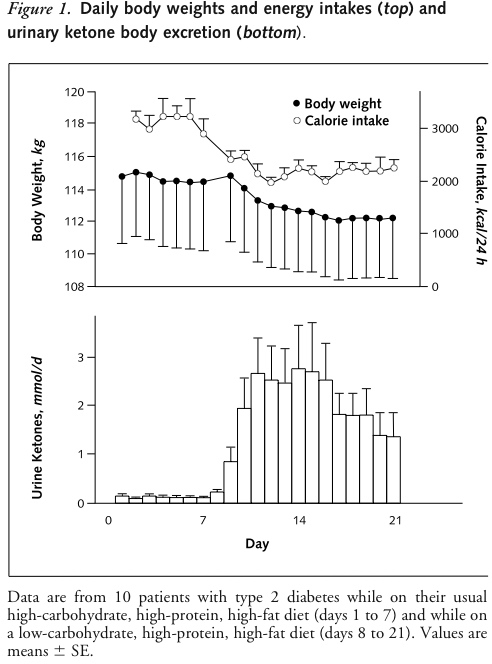 Look at the lines in the upper half of this chart that represent the body weight ranges of all the subjects and the lines representing the caloric intake of all the subjects. Notice that the lines for caloric intake are small while the lines representing the amount of weight loss are large. If you compare the dimensions of these lines to the scale, you find that these subjects varied their caloric intake by about only 200-250 kcal/day. But the variation in weight loss is much, much larger, which means that some subjects lost considerably more weight than would be expected from the caloric deficit while others didn’t lose as much or may have even gained a little. What this chart shows us is that there is indeed a metabolic advantage for some of these people even though on average there wasn’t for the group. And remember the post on Carl Popper: if the metabolic advantage can be shown to be present, that means the hypothesis that a metabolic advantage doesn’t exist is false.
Unfortunately, most medical articles don’t show the array of data as this one has, so all we have to go by is the average, which doesn’t always tell the whole story. One of the things I like about my favorite journal, Nutrition & Metabolism, is that the editors almost always require the raw data to be shown along with the averages, which truly allows astute readers of the medical literature to come to meaningful conclusions about the data. Only after they report it in this way, can you really decide what happened.