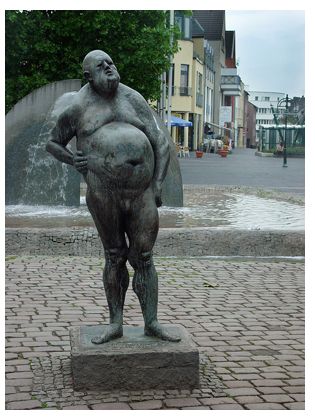 Is the body in the photo at left the new look for today’s man?  If so, it appears that MD and I may have missed the boat yet again.
It seems as though we possess a positive genius for having our timing screwed up.  Our past is littered with missed opportunities to promote our various books, all occasioned by situations beyond our control.  Let me give you a few examples.
We were scheduled to be the guests for the biggest part of one of Soledad O’Brien’s shows when word came down that Hillary Clinton was going to declare her candidacy for the U.S. Senate.  We were in NY (brought by our publisher, thank God) prepared to go on the show the next day when we got bumped to another time.  Another time that never materialized.
I was scheduled to be on O’Reilly live and, in fact, was in the limo sent by Fox to take me to the studio when I got a call on my cell telling me that the Texas fugitives had been captured in Colorado.  Since I was on the way, O’Reilly went ahead and did the interview, but it was taped and played a couple of months later when John Kasich (who is now apparently running for governor of Ohio) was the guest host and viewership was probably lower than had it been O’Reilly live.
MD and I were on our way to Miami (sent by our publisher once again) to appear on a couple of big live TV shows there when we got word that Elian Gonzales had been snatched by the Feds and was being sent back to Cuba.  Bumped again never to return.
We were to appear one afternoon on national TV rebutting the PCRM’s Neal Barnard, who had been all over the airwaves that morning with his ridiculous ‘study’ about low-carb diets.  We were in Santa Barbara at the time, and the network (I can’t remember which on now) had arranged for us to go to a local studio to be interviewed via satellite.  Just as we were about to leave for the studio, we got a call telling us our gig had been canceled because Michael Jackson’s plane was en route to the Santa Barbara airport where he was to turn himself in conjunction with the sexual molestation charges.  After that the news was all Michael Jackson.
I could go on, but you get the picture.  MD and I seem to be snake bit when it comes to book- and/or self-promotional timing.
Now we’ve finished a book, about to be released tomorrow, that is filled with all the latest science, much of it never before published other than in scientific papers, and we may be scooped again.  But in a different way.
Our new book includes info on saturated fat, fatty accumulation in the liver, diacylglycerol, D-ribose, L-leucine, visceral and subcutaneous fat, sagittal abdominal diameter, evolutionary psychology, and on and on, showing how all these things relate to the accumulation and loss of middle-aged fat.  But did we come out with it too late?
Maybe so according to a recent New York Times article titled “It’s Hip to Be Round” with the distressing picture below of various potbellies emblazoned across the top of it.

If this piece is to be believed, men at least have given up the flat-belly look in favor of the more portly Ralph Kramden body habitus.  If you’re of an age, you’ll remember Ralph Kramdem.  He was the character Jackie Gleason played on the television show The Honeymooners.  Taking a look at the photo at left.  That’s Jackie playing Ralph.  Remember Jackie Gleason’s nickname?  The Fat Man.  He was remarkable for his obesity because there was so little of it back then.  Notice, too, how Jackie, aka Ralph, wouldn’t have merited a second look today.  Half the people you see on TV today are more overweight.  And you think we don’t have an obesity epidemic?
According to the Times:

This summer the unvarying male uniform in the precincts of Brooklyn cool has been a pair of shorts cut at knickers length, a V-neck Hanes T-shirt, a pair of generic slip-on sneakers and a straw fedora. Add a leather cuff bracelet if the coolster is gay.
In truth this get-up was pretty much the unvarying male uniform last summer also, but this year an unexpected element has been added to the look, and that is a burgeoning potbelly one might term the Ralph Kramden.
Too pronounced to be blamed on the slouchy cut of a T-shirt, too modest in size to be termed a proper beer gut, developed too young to come under the heading of a paunch, the Ralph Kramden is everywhere to be seen lately…

The article goes on to lay out what I believe is an idiotic rationale (but obviously tongue in cheek) for all this (they blame it on Obama),  then adds

“I sort of think the six-pack abs obsession got so prissy it stopped being masculine,” is how Aaron Hicklin, the editor of Out, explains the emergence of the Ralph Kramden. What once seemed young and hot, for gay and straight men alike, now seems passé. Like manscaping, spray-on tans and other metrosexual affectations, having a belly one can bounce quarters off suggests that you may have too much time on your hands.
“It’s not cool to be seen spending so much time fussing around about your body,” Mr. Hicklin said.
And so guys can happily and guiltlessly go to seed.

So, there goes half our audience.  Always a day late and a dollar short.  I suppose we should have written a book describing how to develop the middle-aged middle before middle age.
On another note, if you still don’t think there is an obesity epidemic right now, take a look at this old video of Manhattan, NY filmed in the early 1920s.
[youtube]”https://www.youtube.com/watch?v=G1ulZvg8Wh4″[/youtube]
Check at 1:50 and 9:16 to see the crowd scenes.  The people look like stick people.  They wouldn’t look that way if the film were made today.
And, if you want to read a little more about our new book, Tim Ferriss has excerpted part of one of the chapters here.
Last but not least, we’ve gotten some photos back of the first testimonials for our news book.  The photo on the right is the before, the one on the left, after six weeks on the plan. 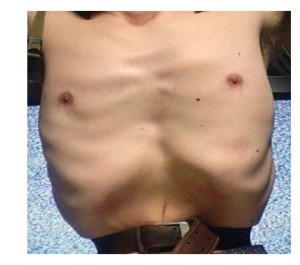