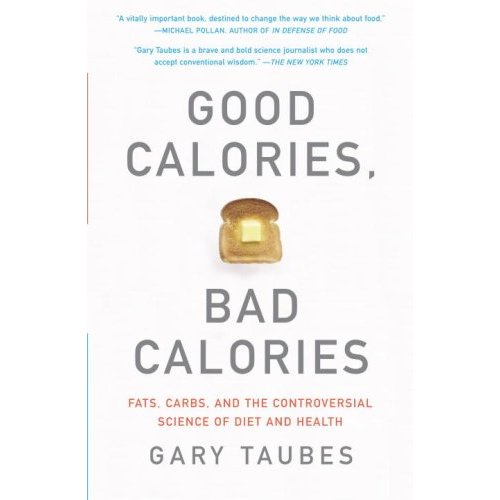 I’ve just discovered that the soft-cover version of Good Calories, Bad Calories is out.  I guess it has been out for a few weeks, but I just discovered it was available.  If any of you have been waiting for the paperback before reading this terrific book, now is the time to get it.
Since GCBC came out a year or two ago, I’ve gotten countless comments asking me what Gary thinks about this topic or that one.  And I’ve gotten comments from folks asking me to ask Gary a question for them.  I was going to interview Gary and post his responses to my questions when it occurred to me that you all might like to ask questions of him directly without having them come through me.  I contacted Gary this weekend to see if he would be willing to answer specific questions from people on this blog.  He very generously agreed to do so.
Send your questions in via the comment section.  I ask on Gary’s behalf that you ask no personal medical questions, but questions about the science and the history of the science behind the way we eat today and the way we probably should be eating.  I promised Gary that he wouldn’t have to answer questions by the score, so we’ll see what comes in.  He and I will look at the questions and answer those that are a) the most common, b) those of the most general interest, and c) those that he feels are particularly important.
I know I don’t have to tell the readers of this blog not to be shy, but I will anyway.  Don’t be shy.  Get those questions in. If you’ve had a question that’s been gnawing at your brain, now’s the time to ask.
I’m heading off for a 9 hour drive to make it home in time to do my civic duty tomorrow, so I’ll be out of the loop for a while.  I can post comments through my Blackberry, however, so don’t hesitate to ask the question you would like to ask.
Note: I have closed the comments on this post.  Since Gary agreed to answer a number of questions, I think 101 is probably enough.  Thanks for all your interest and intelligent questions.