the cells. The supplements we take don’t make it into the mitochondria, so they’re not really effective in protecting them. If mitochondria get severely enough damaged, they die. If cells lose their mitochondria, they lose their power source, and they die. When enough cells die, we die.
Before we can understand how free radicals are created, we need to understand what happens to the food we eat. We know that food provides us with the energy we need to live, but most people don’t really understand how we use the food we eat. When we eat a steak, how do we use the energy contained in the steak to power ourselves? We use it to convert ADP into ATP. ATP (adenosine triphosphate) is the energy currency of the body. It is a molecule with high-energy phosphate bonds that when cleaved release the energy required to operate all of the body’s functions. ADP (adenosine diphosphate) is converted to ATP in the mitochondria. Energy is required for this process, and that energy comes from food.
Various metabolic pathways break down the food we eat and reduce it to high-energy electrons that end up in the mitochondria. These electrons are passed along from one complicated molecular structure to another along the inner mitochondrial membrane until they are finally handed off to oxygen, the ultimate electron receptor. (I’m really simplifying this process; entire books are written about it. I’m just giving you the most basic gist.) As these electrons are handed off from one complex to another, the energy they release during the transfer moves protons (hydrogen ions: H+) across this inner mitochondrial membrane. An electrochemical gradient is created when these hydrogen ions stack up on one side of the membrane. The electrochemical gradient is the force driving the production of ATP from ADP. Energy from food creates the electrochemical gradient, the electrochemical gradient drives the production of ATP, so, thusly, energy from food is converted into ATP. 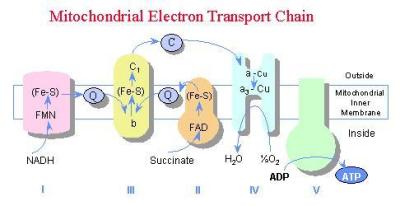