Another reason to opt for krill oil 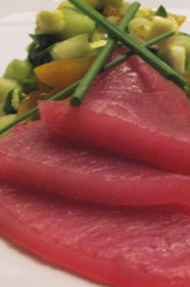 The standard Western diet is sadly lacking in omega-3 fats. Most of the recommendations we hear are to increase our intake of omega-3s by eating fish a few times per week. Most people who do eat fish eat tuna, the most readily available fish around that contains a halfway decent level of omega-3 fats.
But news reports over the past several years have put a lot of us off of tune, at least the canned variety, with reports of how much mercury such tuna contains. MD and I have opted to get our tuna as sushi grade tuna that we get either at Japanese restaurants or by purchasing it at a natural foods grocer and making our own sashimi. Now comes a report that gives us pause.
The International Herald Tribune published an article story showing that even sushi-grade tuna is crawling with mercury, which makes fish eating now a Faustian bargain. We can get the omega-3s, but at the expense of a ton of mercury.

Recent laboratory tests found so much mercury in tuna sushi from 20 Manhattan stores and restaurants that at most of them, a regular diet of six pieces a week would exceed the levels considered acceptable by the Environmental Protection Agency.
Sushi from 5 of the 20 places had mercury levels so high that the Food and Drug Administration could take legal action to remove the fish from the market. The sushi was bought by The New York Times in October.

But maybe this is just a freaky sample. I’m not so sure. And the article goes on to state that the more expensive the tuna, the greater the contamination.

These findings reinforce results in other studies showing that more expensive tuna usually contains more mercury because it is more likely to come from a larger species, which accumulates mercury from the fish it eats. Mercury enters the environment as an industrial pollutant.

Now, I love sushi (actually, MD and I almost always opt for sashimi, which is the raw fish without the sticky rice, as shown in the photo above), but I’m not really willing to sacrifice my health for it. I get most of my omaga-3 fat from the krill oil that I take daily. Krill are tiny shrimplike creatures that are at the bottom of the food chain, and, thus, don’t concentrate mercury in the same way that fish do. And krill have a unique phospholipid structure to their fatty acid bonds that makes them much more absorbable, preventing the fishy smelling belching that fish oil capsules sometimes cause. If you want to get your omega-3s as tastelessly and painlessly as possible – and without the risk of mercury toxicity – you can’t go wrong with krill oil.  Even a few years ago krill oil wasn’t readily available, but now you can find it all over the place.  And it’s not all that expensive.   So, to get your daily dose of omega-3, down a krill oil gelcap or two and forget the recommendation to eat fish several times per week.