Another reason to limit the TV time of overweight kids 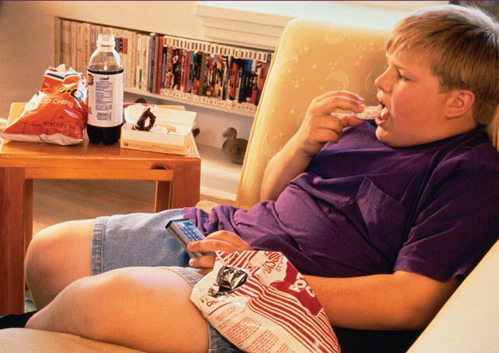 Scientists at the University of Liverpool are presenting data this week at the European Congress on Obesity demonstrating that children are indeed influenced mightily by food ads they see on television.
The researchers had 60 kids (aged 9-11) watch various TV ads followed by a cartoon show followed by a presentation of food. Some of the ads were for toys, others wre for food products. After the ads and the cartoons, the children increased their food intake substantially with the overweight increasing theirs the most. Normal weight kids upped their intake by 84 percent whereas the obese kids increased theirs by 134 percent. The merely overweight fell in the middle with a consumption of 101 percent of their normal intake. These figures are pretty significant since even the normal weight kids ate almost double their normal amount and the obese almost triple. (I’ve read only the press release, which doesn’t tell how much is ‘normal’ for these kids. I would assume that the researchers had the kids fast for a given period of time, then let them watch the cartoons, then provided them with food and measured consumption. But I don’t know this for sure.)
What I find most interesting about this study based what I read in the press release is the types of foods that the normal weight kids overate compared to the obese.

It was also found that weight dictated food preference during the experiment. Food of differing fat contents was made available to the children to eat at their own will, ranging from high fat sweet snacks to low fat savoury products. The obese group consistently chose the highest fat product – chocolate – whereas the overweight children chose jelly sweets which have a lower fat content, as well as chocolate.

A couple of things about this…
The press release doesn’t tell us what the normal weight kids chowed down on, although it is implied that they may have hit the low-fat savory snacks (which are typically also low in carbohydrates). But it’s clear that the researchers have a fat phobia and figure that the obesity in these kids comes from the fat they eat. Both the chocolate and the jelly sweets are crawling with carbohydrates. Of those, however, there is no mention.
The press release makes it seem as if the food commercials drove the obese kids to eat chocolate and the slightly less obese kids to eat jelly sweets. I would argue that the ads drove the kids to eat not a specific food, but the foods that each kid liked the best. If a kid is hungry and you give him/her a wide array of foods, it would make sense that he/she would go after the favored foods. It would be nice to know what foods the food ads were promoting.
Perhaps these food choices are simply a mirror of what got these kids overweight in the first place.
There is some physiological basis for this hunger after the food ads. There are two phases of the release of insulin: the first phase and the second phase. The first phase is also called the cephalic phase because it originates in the brain. Let me explain.
Elevated blood sugar is so toxic that the body had developed multiple methods to keep it from going too high. One of these ways is to get the insulin into the blood at about the same time as the sugar from a sugary meal gets there so that the system is prepared and doesn’t have to wait for the elevated blood sugar to send the message to the pancreas, then for the pancreas to get the message, make and release insulin. There is already some insulin there waiting.  The body brings this about by the cephalic phase of insulin release.
If you walk by a bakery and smell the fresh bread baking or if you open a box of warm donuts of if someone sets a plate of cake and ice cream before you (or if you write about these things – it’s happening to me right now), your brain says, Uh oh, sugars coming, better get ready. The brain sends a quick message to the pancreas to start releasing insulin. Then when the sugar from the fresh baked bread, the warm donuts, or the cake and ice cream hits your bloodstream insulin is already there waiting for it so that sugar doesn’t go as high as it otherwise would. Once the blood sugar level does start going up (because the cephalic phase doesn’t release enough insulin to handle the whole load of sugar), it sends the signal to the pancreas for more insulin, which is the second phase of insulin secretion.
It’s easy to see what happens if you walk by the bakery and don’t eat the bread or if you don’t eat the warm donuts or cake and ice cream. Suddenly you’ve got a little squirt of insulin on board without the expected blood sugar increase. What does this excess insulin do? It acts on the blood sugar that’s already there, which may be at a normal level. When it does, the insulin quickly reduces the blood sugar. And, as I’ve written about before, a falling blood sugar makes you hungry almost faster than anything else. That’s why you get hungry when you smell the fresh bread or see and smell the warm donuts or have someone give you a plate of cake and ice cream (or write about it). You get hungry even if you weren’t hungry to begin with because your cephalic phase of insulin release drops your blood sugar. (You can even just sit and think about food and have the same thing happen.)
These kids had the perfect set up for hunger. They saw the food ads, then they watched the cartoon for 4-5 minutes (I’m assuming it was a typical cartoon), allowing the cephalic phase of their insulin release to knock their blood sugars in the dirt, then they were provided with food. Is it any wonder they ate more than expected?
The question is do these food ads drive kids via the above physiology to eat more at their regularly scheduled meals or is it only when their blood sugar is at a nadir driven by the insulin response due to the food ads?
The research does show – at least the way I interpret it – that if you’re going to let your kids watch TV shows that have a lot of food ads, it’s probably best to not make unlimited snacks available to them during the time they’re watching and immediately after. Of give them such low-carb snacks as jerky or nuts. The little buggers probably won’t like it, but, hey, they’re kids. They’ll get over it.  They don’t know you have their best interests at heart.