Another reason to eat grass-fed beef 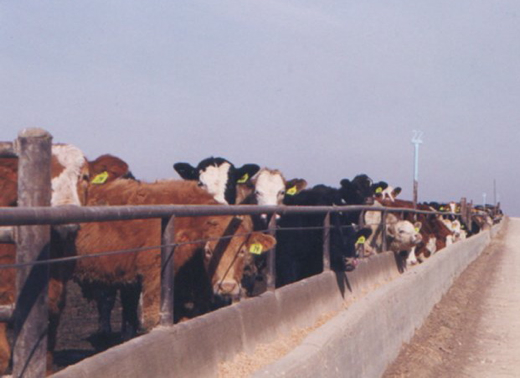 Although this isn’t really the season for an E. coli O157:H7 infection – such infections are most common in the summer and spring – a recent New York Times article (requires free registration) about the lengths to which slaughterhouses are going to eliminate such infections got me to thinking.
There are a couple of reasons we’ve had this plague visited upon us: we mistreat our beef cattle and we mistreat ourselves. There isn’t a whole lot we can do to deal with the mistreatment of cattle on a feedlot, but there is a lot we can do to keep from mistreating ourselves. Before we get into the steps we can take to protect ourselves from E. coli O157, let’s take a deeper look at where this bug comes from and what it does.
There are countless millions of harmless E. Coli bacteria in the digestive systems of cattle just as there are in our own. But when cows are fed on grain, which contains many more calories per pound than does grass or hay, they gain weight and fatten more quickly, and the conditions in their GI tracts changes to favor E. coli O157. If the cattle are ill or stressed – conditions common to a feedlot – they become even more susceptible. The first E. coli O157 infection was reported in 1982, which makes it likely that the bug mutated from a non-pathogenic E. coli around that time.
Feedlot operators basically pack cattle together in close quarters in which they stand or lie in manure all day, feed them an unnatural diet that changes 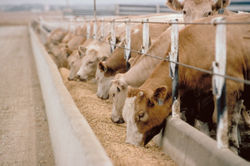 the environment within their digestive systems, make them sick, treat them with antibiotics to fight the infections such conditions cause, add growth hormones to increase weight gain a little more, and ultimately slaughter them. Most of the beef you buy has suffered this fate. Even the beef that ends up labeled ‘Organic’ pretty much goes through the same process except it gets fed ‘organic’ grain and doesn’t get the antibiotics or the hormones, which is an improvement for you but not much of one for the cow. The meat from these cattle can still be contaminated since the majority of the E. coli arises as a function of grain feeding.
As these infected animals defecate they add more E. coli O157 to all the manure in which they live the last few weeks of their lives. If you’ve ever seen a feedlot you’ll know what I’m talking about when I tell you that these cattle are covered in manure. It’s all over their legs, bellies and usually pretty much everywhere. And this manure coating is swarming with E. coli of all kinds including the deadly O157:H7 variety. When the cattle are killed and processed some of this bad E. coli from their hides makes its way into the meat because it’s virtually impossible to get rid of all of it.
It doesn’t really matter if there is a little bad E. coli on the steaks we buy because the bugs are on the outside of the steak and the cooking process kills them. The problem arises mainly from hamburger because your pound of hamburger meat can come from several different animals (your steak, obviously, comes from only one), and the E. coli can – and often is – deep inside the ground beef. If you (or McDonald’s) doesn’t cook the hamburger enough to really get the inside cooked, you could get a nasty dose of E. coli O157:H7.
Here is an excerpt from the Times article on the steps taken to rid the meat of E. coli, which shows where hamburger comes from:

Once the animal is killed, the hide is removed, first by knives and then by machines, in a manner intended to keep it away from the exposed carcass, starting near the anus and hind legs.
After each cut is made to remove the hide, a worker follows behind with a steam vacuum to kill and suck away microbes. The carcass, pulled along on an overhead rail, is then sent into a cabinet with pivoting nozzles that soak it with water at about 185 degrees.
After the head is removed and before the animal is gutted, the carcass is sprayed with a mild acid wash, again to reduce the level of microbes. Besides removing the hide, one of the most critical steps to prevent E. coli 0157:H7 comes when the animal is eviscerated and its internal organs are removed.
The workers who remove the organs are careful not to cut the bowel, which could spread manure, and a worker looks over the internal organs to make sure the intestines are intact. The carcasses are then sawed in half, and the cut line is steam vacuumed.
In one of the most important interventions, the split carcasses are sent into a 30-foot-long, hissing stainless-steel cabinet, where rows of nozzles spray them with steam for at least 13 seconds before they enter a second chamber that douses them with a disinfectant for at least 15 seconds.
The last step comes after the carcasses have been cut into steaks and roasts and leftover scraps, with the latter tossed into 2,000-pound bins for grinding into hamburger meat. Workers are assigned to cut at least 60 four-inch by one-half-inch strips from each lot of trimmings; a lot is five 2,000-pound bins.
Those samples are then ferried to a laboratory, where they are mixed with solution that encourages E. coli 0157:H7 to grow. After incubating for eight hours, the samples are tested, and if positive for the germ, that lot is diverted from being used as ground beef. Instead, it is used in cooked products or otherwise processed to kill the microbes.

The take home messages are several: always cook your hamburger meat through and through; eat mainly grass fed beef; and maintain a normal stomach acid.