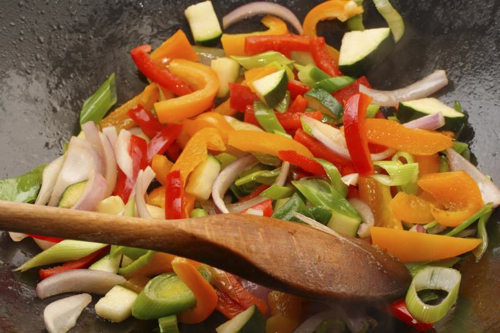 I want to give you a few words of advice right up front. Keep this post close at hand so that you can send it out whenever anyone makes one of the following comments to you:

The current issue (June 2008) of the International Journal of Obesity, published by the Nature Publishing Group (Nature is the most prestigious scientific journal on the planet), contains an article titled Vegetable-rich food pattern is related to obesity in China that is most enlightening and interesting on many levels.
Researchers evaluating the obesity status of the Chinese discovered that

China is facing an obesity epidemic. Between 1992 and 2002, the prevalence of overweight and obesity increased in all gender and age groups and in all geographic areas of the country. Using the World Health Organization body mass index cutoff points, the combined prevalence of overweight and obesity increased from 14.6 to 21.8% during this period. [An increase of about 50%, which pretty much mirrors what has happened in the US, although from a lower starting point.]

What is even more telling is that the prevalence of central obesity, a much more representative measure of overall health, was as follows:

In an effort to figure out what is going on researchers evaluated the diets of almost 3000 Chinese men and women (average age 47 yo) from all walks of life and all educational levels living in rural and urban areas. They found the typical Chinese diet to be

characterized by a high intake of vegetables and other plant foods, and thus the intake of carbohydrates and fiber is high.

When these researchers started evaluating the specifics of the Chinese diet, they found themselves ensnared in a thorny thicket of cognitive dissonance. How they hacked their way out shows just how nutritionally biased researchers are today and how they will twist and turn and torture the data (and outright misrepresent it) to make it confirm their biases.
Let’s take a look.
They report early on in the paper that despite the ongoing nutritional transition that the Chinese are going through (brought about by Western influences) that

Which they set out to do. It is obvious from the first two sentences of the quote right above what the bias of these researchers is: fruits and vegetables are good for you. And more of them is even better. Problem is that there really isn’t any definitive research showing this, although it is widely believed.
I’m pretty certain that when these people decided to do this study their game plan was to divide the study population into quartiles or quintiles of fruit and vegetable consumption. And I’m sure they figured that those subjects in the quartile or quintile of the highest fruit and vegetable consumption would show the least obesity while those in the lowest fraction would show the most. But it didn’t turn out that way for them.
In fact, it was just the opposite. The researchers did divide the subjects into quartiles (fourths) as a function of fruit and vegetable consumption, and they found that the subjects eating the most fruits and vegetables were the fattest. As they put it:

So what do good scientists do when they discover that the data doesn’t conform to their preconceived notions? They change their thinking to fit the data. What do sorry scientists do when the data doesn’t conform to their preconceived notions? They interpret the data so that it does fit with their thinking. Which is just what these researchers did.
The data is pretty clear that those subjects who ate the most vegetables were the most obese. It’s also clear from the data that those subjects who ate the most vegetables also ate the most calories to the tune of about 200 kcal more per day. Now it would be easy and within what the data show to state that those subjects consuming the most calories were the most obese. No one would argue with that. But it flies in the face of the popular idea that you can eat all the calories you want as long as they are fruits and vegetables. Dean Ornish wrote a bestselling book titled Eat More Weigh Less on this very subject.
Our researchers are in a quandary. Their data that they expected to show one thing is not cooperating. And try though they might to legitimately present it, they can’t without somehow contradicting the idea that vegetables (in whatever quantity) are healthful. Where to go? What to do?
What do you think they did?
What all good mainstream researchers do. They blamed it on fat. I’m not kidding.
Here we go right from the paper. As Dave Barry would say: I’M NOT MAKING THIS UP.

You can certainly see where they’re headed with this. And they don’t disappoint.

There you have it. Fat is the culprit. And although vegetable oils have been the darling fats of the mainstream folks for ages, they don’t hesitate to throw them under the bus when their beloved vegetables are challenged.
But hold on. There is a fly in the ointment here.
There is absolutely no difference in the amount of fat consumed in the group that ate the most vegetables as compared to the group who ate the least. In men the grams of fat were exactly the same in both groups; in women their was a slight difference, but it didn’t reach statistical significance. And as a percent of energy intake (the measurement the mainstream loves), fat intake dropped from 32 percent to 31 percent in both males and females as vegetable intake went up.
You think I’m pulling your leg on this? Researchers publishing in a major journal (and the peers who reviewed them) wouldn’t say all this if it weren’t supported by the data. Right?
Well, here is the chart from the article showing all the data.

Click on it to blow it up to readable size and look down to where it lists the fat intake and come to your own conclusion. Then go back up to the quotes from the article that I have put in bold print. Unbelievable. This is why you never want to panic when you read the press report of a new piece of research. Oh, and BTW, have you noticed how the press has ignored this study?
I saw no mainstream press articles when I Googled; the one article I did see from an online publication picked up the misleading conclusion from the paper.

A Chinese study came up with the — to Americans — paradoxical finding that the more vegetables people ate, the fatter they were.
Why? Because the Chinese in this population in Jiangsu Province were stir-frying their vegetables in “generous” amounts of oil, and the more vegetables they ate, the more energy-dense oil they were eating.

If you’re going to draw any conclusions at all from this data in terms of macronutrient consumption and obesity, it’s got to be that carbs make you fat since the data show that carbs are the macrontrient that increased the most in both men and women with increasing obesity.