Anatomy of a statin ad 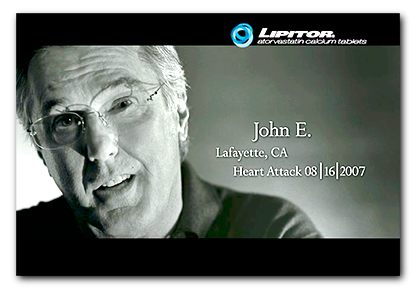 I posted last year about all the trouble Pfizer got into by using Robert Jarvik, the developer of the artificial heart, as their spokesman for the most commonly prescribed statin drug Lipitor.  Pfizer has taken a new tack and is now bombarding the airwaves with yet another commercial for Lipitor using as their spokesman an actual victim of a heart attack.
They chose a 58 year old California ad man and talent agent named John Erlendson who did indeed have a heart attack at age 57, and who was not taking any cholesterol-lowering medicines prior to that.  As opposed to the Gollum-like Jarvik, Mr. Erlendson comes across as a sincere guy who is genuinely distraught over his medical condition.  He is easy to empathize with.
Pfizer spent $181 million advertising Lipitor last year, and if the frequency with which they are running their new ad is any indication, I’m sure they are not pinching pennies with their ad budget now. It’s difficult to have a television on for half an hour and not see Mr. Erlendson at least once.  But, hey, what’s a measly $181 million when you’ve got sales of $12.7 billion?  I’ll take that deal any day.
This recent ad is a prime example of how viewers are manipulated by clever ad people.  You’ve got to be able to interpret the ads just like you do the medical literature.  I want to walk through this ad with you, but first, just take a minute and watch it.
[youtube]http://www.youtube.com/watch?v=lNFuEcy5ekg[/youtube]
Makes you want to run out and grab some Lipitor quick, doesn’t it.  You don’t want John Erlendson’s fate to befall you, and based on his oozing sincerity, neither does he.
You know how the ad makes you feel.  Now let’s look at it line by line to see what it really says.
Mr. Erlendson looks out from the screen and says:

My doctor told me I should have been doing more for my high cholesterol.

As it turns out, Mr. Erlendson did have high cholesterol before his heart attack, and his doctor probably did warn him about it. (Of course, 50 percent of people who have heart attacks have normal or low cholesterol, so his being high is not the danger sign so many think it is.)

What was I thinking?

But now I trust my heart to Lipitor.

There are several implications in the above dialogue that we all accept subconsciously.  First, that high cholesterol was the cause of this man’s heart attack.  Second, that had he taken Lipitor he would have prevented his heart attack.  And third that you, the viewer, can protect yourself against Mr. Erlendson’s fate if only you take Lipitor before it’s too late.
Notice how cleverly they got this message across without actually saying it?  That can’t make the claim that high cholesterol causes heart disease because, although the vast majority of people seem to believe it, that relationship has never been proven.  Pfizer would have had the FDA all over them had they tried to actually make the claim that Lipitor would have prevented Mr. E’s heart attack because they have no way of knowing that.  Based on the randomized clinical trials for statins, Mr. Erlendson was not in a high risk group, so there is no evidence that a statin drug would have done him any good whatsoever.  And the FDA would never have allowed Pfizer to actually say anything remotely like: Take Lipitor and protect yourself from Mr. E’s fate.  But, because of how cleverly this ad was written, this all comes across without it being said, so the FDA can’t lay a glove on them.
Next in the commercial, Mr. Erlendson carries on in the background and the announcer comes on in a voice over.

When diet and exercise are not enough, adding Lipitor may help.

Really?  Rubbing Vick’s Vapor Rub on your chest ‘may’ help too.  ‘May’ is a real weasel word that ad people use all the time.  They say ‘may,’ the listener hears ‘will.’
Interestingly, during the voice over part of the commercial Mr. Erlendson can be seen in the background riding a bike, which implies that he probably was exercising yet still had his heart attack. Or it implies that now that he’s on Lipitor, his life has changed for the better.  I can’t figure out which.
The voice over continues:

Unlike some other cholesterol-lowering medications, Lipitor is FDA approved to reduce the risk of heart attack, stroke and certain kinds of heart surgeries if you have several common risk factors for heart disease.

Lipitor has been extensively studied with over 16 years of research.

Yes, but has this 16 years of research shown anything worthwhile?  It has shown that Lipitor and other statin drugs don’t reduce all-cause mortality (the statistic you should really care about) in women of any age, in men over 65 and in men under 65 with no history of heart disease.  Only in men under 65 who have actually had a heart attack have statins shown any benefit in reducing all-cause mortality.  And even that is minimal.  Mr. Erlendson falls into this last group, so he is one of the few people who may actually get some benefit from a statin.  But he didn’t fall into this group before his heart attack because he had no history of heart disease before his heart attack.  High cholesterol is a lab finding, not a history of heart disease.  In sum, the 16 years of Lipitor research have been pretty fruitless.  But that’s not the message you take away from this ad.
Then the voice over drones quickly through all the problems that one can experience with Lipitor.  Then it’s back to Mr. Erlendson.

I learned the hard way, but you may be able to do something.

There is our friendly weasel word ‘may’ yet again.  Implies, once more, that Lipitor will save your butt.
Then back to the voice over.

Have a heart to heart with your doctor about your risk and about Lipitor.

Okay, so the next time you go to your doctor, you inquire about your cholesterol and ask if Lipitor would work for you.  After all, you don’t want to learn the hard way like John Erlendson, do you?  Your doctor, being brainwashed as they almost all are, gives you a prescription for Lipitor because, hey, why not, it’s so good they’re talking about putting it in the drinking water.
You go away with a $150 a month drug habit that does you no good whatsoever.
The creative people at Pfizer have put together an ad that says nothing, but implies everything.  They stay out of hot water with all the regulatory agencies, yet the viewer takes away the exact message that the advertiser could never get by with saying explicitly.  Is it any wonder that half the country is on a statin?  Ain’t Madison Avenue grand?
And, by the way, you, too, can be in a Lipitor ad.  Click here to find out how.