An evening with Sir George Martin 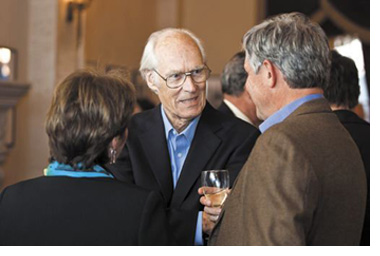 I’m taking a short break from the great Anthony Colpo smackdown to report on all the goings on with the ‘wretched’ choral society and the Beatles concert.  As I’ve mentioned before, MD has been pushing for a Beatles concert since she’s been the president (her three-year term will be mercifully over on June 30, and I’ll have my wife back).  It’s all come to pass with a whole lot of help from a whole bunch of people. And, thanks to all this effort by all these people – especially Brooks Firestone – it has turned into a much, much huger event than she had ever imagined.

The event kicked off last night with a small reception with Sir George Martin.  About 50 people came to a wine and hors d’oeuvres at the Founders Room of the Granada theater.  Sir George gave a wonderful talk about his early career and his first meeting with the Beatles.  At that time non-Sir George was heading EMI records and his specialty was comedy records.  Brian Epstein had arranged an appointment (Martin said he still has his diary, which lists Epstein as Bernard Epstein) and when Martin told him that he wasn’t interested, Epstein looked so dejected, that Martin relented and said, “Okay, I’ll give them one hour next week.”

The Beatles came in at the appointed time, were terrible as musicians, but were absolutely charming.  Martin took them into the control room to listen to their audition recording and told them to tell him if there was anything they didn’t like.  George Harrison promptly said,”For starters, I’m not crazy about your tie.”  The other Beatles were mortified because they thought George may have blown the deal for them.  George Martin, on the other hand, thought it was hilarious.  At the end of the day, he agreed to give them a recording contract.  Then, as he said in his talk, “As we all know, the rest is history.”

He also said that after he had given the Beatles their first contract, he discovered that they had been turned down by every other record producer in England.  He had been their last resort.  Funny how things work out.

When MD and I woke up this morning, the article below was in the Santa Barbara paper. I shamelessly ripped the photo of MD and me with Sir George and put it at the top of this post. 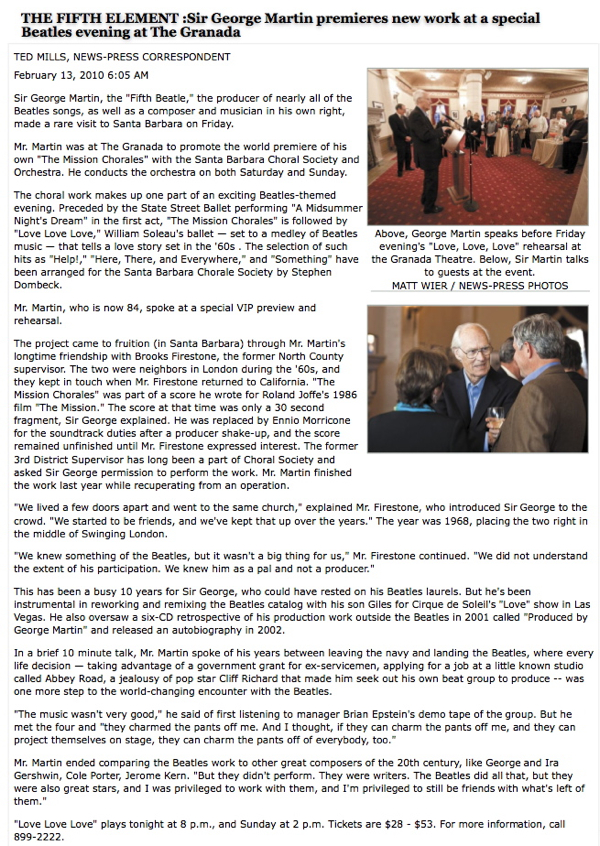 The Dallas branch of the Eades fam flew in from Dallas for the big event, but the eldest grandchild got sick on the plane.  The two others were in fine shape, though, and ended up having their own audience with Sir George in his dressing room.  The eldest woke up in great shape this morning, so he’ll be at the big premier performance tonight. 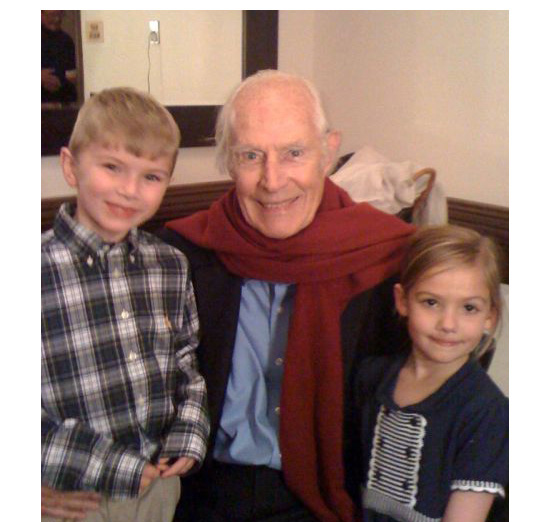 Photo at top and in article by Matt Weir

Photo at bottom by MD Eades and her iPhone