Accurate food predictions from 80 years ago 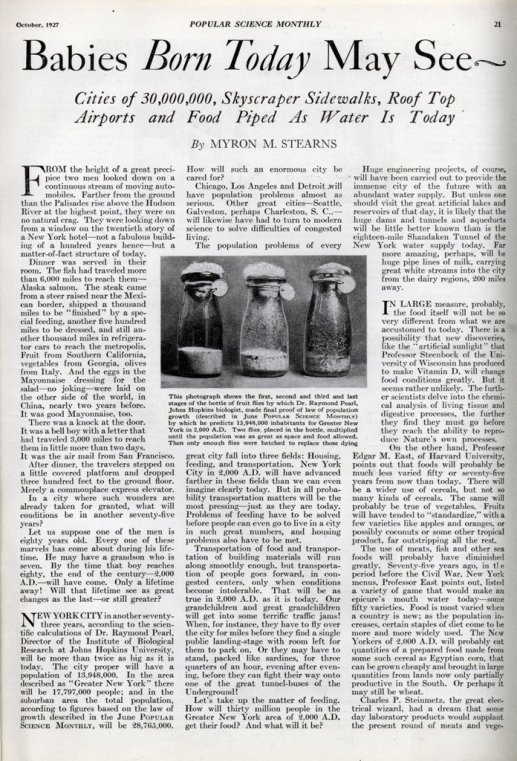 The above comes from the October 1927 issue of Popular Science, (Click here for larger, readable view) and proves to be remarkable prescient in terms of food.
The article overestimates the population growth, predicting for New York City proper

If I had to guess, I would figure that they would underestimate the population growth, but they didn’t. The latest data show that New York now has a population of a little over 8 million with the surrounding Greater New York (including the burbs) housing about 20 million people.
The article predicts, as all non-aviation experienced futurists do, the notion that everyone will have flying cars and that the buildings will all have landing pads on the roofs. It ain’t going to happen unless some heretofore unknown means of keeping airplanes aloft is invented, and that is highly unlikely. The idea of our all having flying cars is a fun one, but one clearly not based on the laws of gravity. Nor on the realization of just how complex aviation is.
What I found most interesting about this old article was the prediction made about what people would be eating in New York City in the year 2000. Other than the idea that milk would be piped in through some kind of a dairy aqueduct, the prognosticating was pretty much on the mark.

…Professor Edgar M. East, of Harvard University, points out that foods will probably be much less varied fifty or seventy-five years from now than today. There will be a wider use of cereals [my italics], but not so many kinds of cereals. The same will probably be true of vegetables. Fruits will have tended to “standardize,” with a few varieties like apples and oranges, or possibly coconuts or some other tropical product, far outstripping all the rest.
The use of meats, fish and other sea foods will probably have diminished greatly. Seventy-five years ago, in the period before the Civil War, New York menus, Professor East points out, listed a variety of game that would make an epicure’s mouth water today—some fifty varieties. Food is most varied when a country is new; as the population increases, certain staples of diet come to be more and more widely used. The New Yorkers of 2,000 A.D. will probably eat quantities of a prepared food made from some such cereal as Egyptian corn [my italics], that can be grown cheaply and brought in large quantities from lands now only partially productive in the South. Or perhaps it may still be wheat.

They certainly hit the nail on the head with the grain consumption estimates. And they were right in spades on the corn.
They were also correct in their claim that meat consumption would change in that there would be many fewer choices. What can one get in New York (or any major city) these days? A steak, pork chops, lamb chops, duck, turkey, salmon, Chilean sea bass, lobster, shrimp, oysters and, occasionally, wild game that’s usually farm raised.
I’m currently reading a wonderful book about the doomed Franklin Polar expedition of 1845, Ice Blink. The author has a copy of one of the provisioning lists for the ships. I’ve divided it in half so the items can be read. Look at what was commonly available in London in 1845: 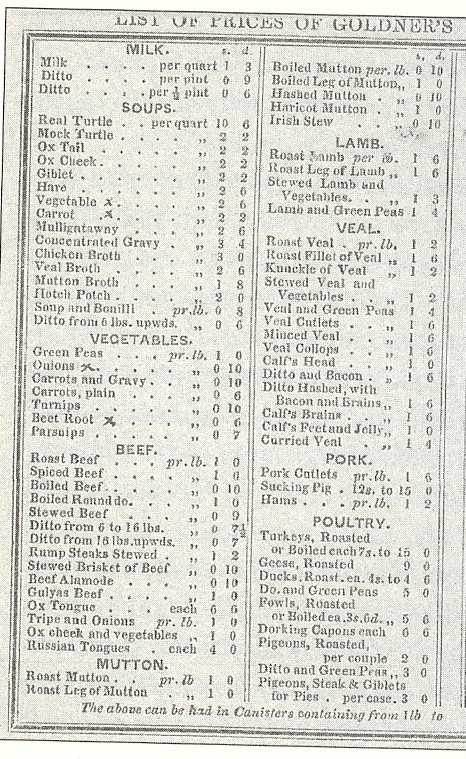 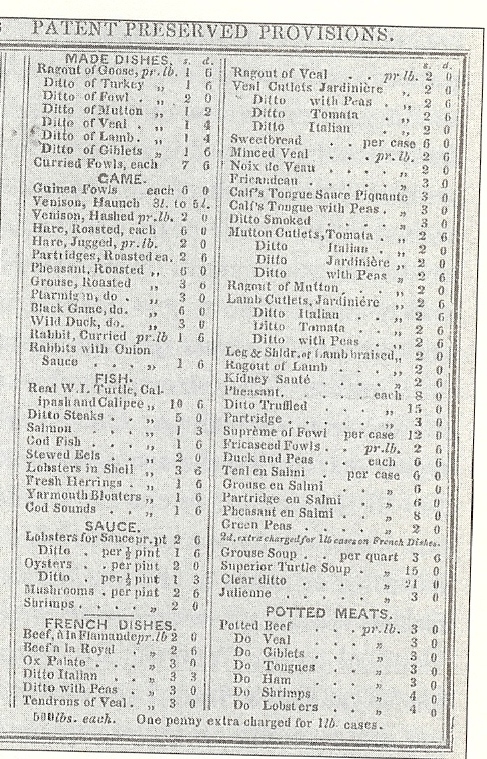 Quite the difference, I would say.
You would think that as cities became larger there would be more variety, not less. But, it’s pretty obvious that the predictors in 1927 were a lot smarter about all this than I am.