About town in London 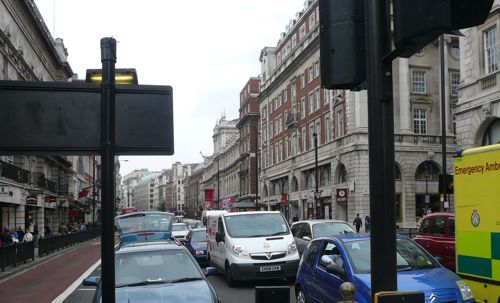 I apologize for not being more attentive to this blog since leaving Hong Kong a week ago.  But my excuse is that we’ve  been in London.  I’ve always been on the same wave length as Samuel Johnson, who said “When a man is tired of London, he is tired of life; for there is in London all that life can afford.”  I have a great blog post in mind, but I just can’t bring myself to spend the three or four hours it will take me to put it up when London beckons outside my window.

There are so many things to like about London that I don’t know where to begin to describe them to those who haven’t had the opportunity to visit.  For one, it’s probably the only major city in the Western world in which the highest  building is only 46 stories.  Most of London looks much like the photo at the top of this post that I took while crossing the street yesterday – non-skyscraper skylines with old buildings with very old buildings interspersed.  One of the main things I really enjoy about London is the fact that being a pedestrian is almost a full-contact sport requiring full attention, especially for Americans who are used to looking the wrong way when crossing the street.

I loath the American way of being a pedestrian.  In the US pedestrians have the right of way and are usually pretty obnoxious about it.  I can’t stand it when I’m in a car and a pedestrian or a group of pedestrians slowly strolls across the crosswalk, taking their time in an almost passive-aggressive fashion.  The most annoying pedestrians are those who consider it a point of honor not to look at the cars coming to a stop as they saunter across in front of them, as if to look indicates a sign of weakness.  These people know that if the car hits them, it is the driver’s fault and not theirs.  But they don’t stop to consider that they, the pedestrians, will be the ones in the hospital or in the morgue.  They seem not to understand that accidents are called accidents for a reason.  Being kind of an  aggressive person myself, I love to close  on these saunterers at a rate that gets their attention.  I consider it a victory if I make them at least look at my oncoming car and perhaps start to consider if they need to jump or not.

In London there is no doubt.  The roads belong to the cars.  Pedestrians crossing where they shouldn’t be need to be quick on their feet, and even gray-headed duffers jump to when the cars come at them.  And the drivers simply lay on their horns and don’t slow down.  I love it even though I am a pedestrian.  But, I’m no doubt not normal.

We came to London as a part of the big project we’ve been working on.  We had arranged a meeting with Heston Blumenthal and a long lunch at his restaurant The Fat Duck.  Although Heston is probably the best known chef in Europe, he’s not as well known in the United States, but that will change as he has a cooking show that will be coming out there early in 2010.  He is completely self-trained, which is amazing in the world of celebrity chefs, and has only one restaurant, instead of a chain of dozens bearing his name.  But what a restaurant it is.  The Fat Duck has won the title of best restaurant in the world as judged by other chefs for two years running, and can’t run again.  To those of you in the US who want to learn more about Heston and his style of cooking, here is a link to a one hour video special about a Christmas meal he prepared.  Watch it, and you’ll learn why he has the reputation he does. Or Google Heston Blumenthal for many short videos, if you’re not up for watching the longer one.

We met with him for an hour and a half or so and found him to be charming and completely self-effacing.  He comes across in person exactly as he does on TV.  And his restaurant is beyond belief.  We’ve never had such a meal.  In fact, there has never been anything that has even come close.  I took a ton of photos and plan to post about the entire meal, but I haven’t wanted to deny myself London for the several hours it will take me to put up such a post.  We’ll be back in the US tomorrow, and as soon as I go through all the stuff that has stacked up in our absence, I’ll put up the post.  I may even start working on it on the plane.  You will be almost as amazed.  Try to give the video a look if you have the chance, so you can see what a different kind of chef Heston Blumenthal is.

I’ll leave you with a photograph of MD crossing the road on the famous crosswalk at Abbey Road shown on the album cover of the Beatles’ Abbey Road.  Abbey Road Studios where the group recorded for six or seven years is right behind her and to the left.  As many times as MD and I have been to London, we’ve never made the trek over to Abbey Road, but we did early in the evening a couple of days ago.  It was a long hoof, but we made it before dark, and MD, who is a huge Beatles fan, got to fulfill a childhood dream.  And I, of course, selflessly went along to document the occasion. 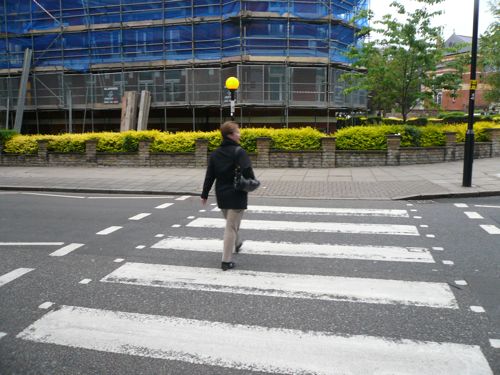