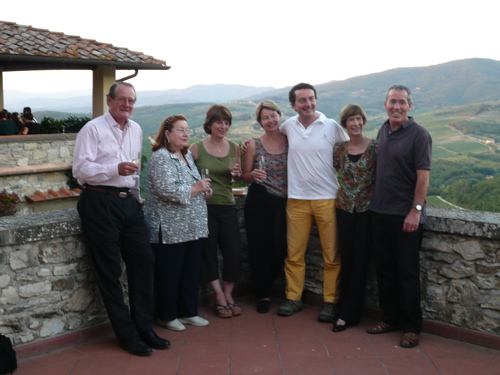 I’ve had a couple of readers ask about the Mediterranean diet as touted by those in the nutritional field as compared to the Mediterranean diet as it is consumed by those who live in the Mediterranean. Our group attended a Tuscan feast held at Castello Verrazzano – a winery that has been in production for centuries and is one hill over from the family of Amerigo Vespucci, the person after whom America was named – a couple of nights ago, and I took some photos to document what we were served.
The picture above is of Luigi Cappellini, the owner and vintner of Castello Verranzzano, who is hugging MD. To MD and Luigi’s right are JoAnne Wasserman, conducter and artistic director of the Santa Barbara Choral Society, Luigi’s mother Donna Clara Cappellini, and Brooks Firestone. To Luigi’s left are Kate Firestone and Jim Robbins . Why are all these people huddled together for this photo? Because MD is the new president of the board of the Santa Barbara Choral Society. Jim Robbins is the outgoing president. Brooks and Kate Firestone are the owners of Firestone Vineyard in Santa Barbara and the parents of Andrew Firestone (one of the first – if not the first—bachelors on The Bachelor). Brooks arranged the whole Tuscan dinner event with the able assistance of Gino Rossi, the director of events such at this at Castello Verrazzano.
You may ask how MD is going to be able to be the president of the Santa Barbara Choral Society when we live in Santa Barbara less than half the time. It is the same question I asked her. She insists she can do it, and based on her performance in other similar situations, I’m sure she will do just fine, thanks chiefly to the wonders of email and telephone and airplanes. 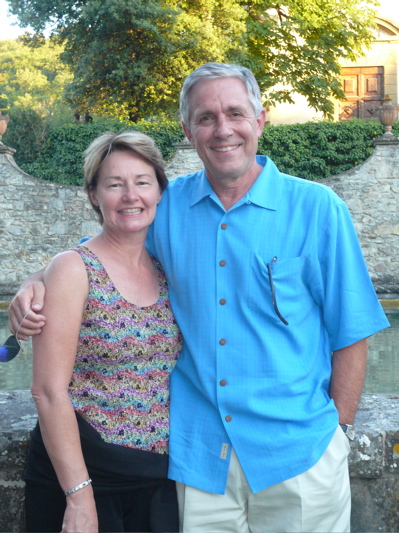 This photo is of MD and me in front of a large fountain at the winery. I apologize for these posed photos, but my aged parents are following our travels on this blog, and these pictures are for them. Hi Folks. We’re fine.
Now to the dinner… 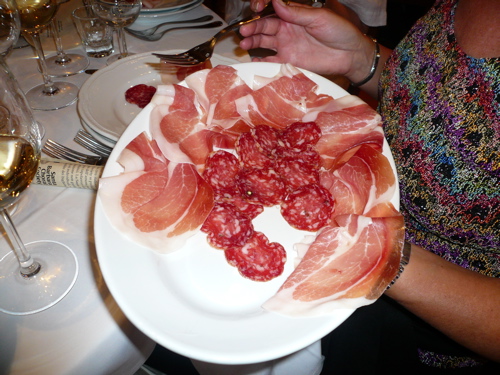 The first course was a plate of wild boar sausage and proscuitto. This was followed by yet another plate of wild boar sausage made with fennel that was out of this world. The winery harvests the boars (cinghiale in Italian) right from the Castello property; we were able to catch a glimpse of a small herd in the woods nearby, but the photo just looks like a little dark blob from the distance we were away so I won’t post it.

This is my plate with the various sausages on it along with a bruschetta covered with chopped tomatoes dressed with a vinaigrette. I didn’t get photos of the full serving plates of some of this food – the bruschetti, for example – because it was served on the opposite side of the table and by the time the serving plate got to me there wasn’t much on it. 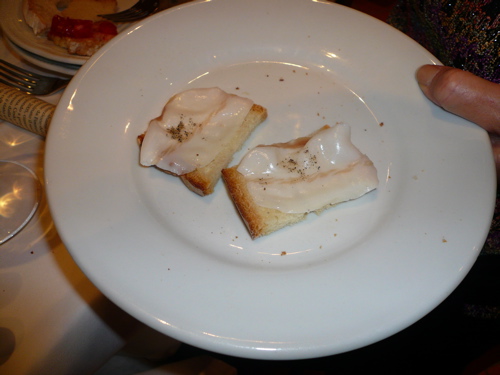 This tasty little treat is lardo, which, just as it sounds, is the fat of the boar. I ate my first piece without the bread and the second with the bread. Sadly, it’s much better with the bread. By itself it tastes like, well, pig fat. Savory pig fat, but pig fat nonetheless. 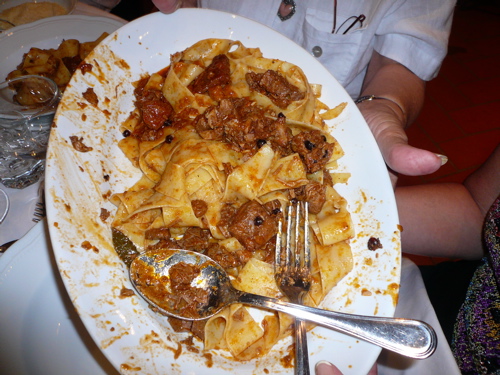 Here is the first real course: Pappardelle (pasta) with wild boar in a brown savory sauce. (Pardon the messy plate, but the serving platter had been half way around before it got to us.) Most of the people at our table picked the pasta out from around the chunks of meat. MD and I did just the opposite. 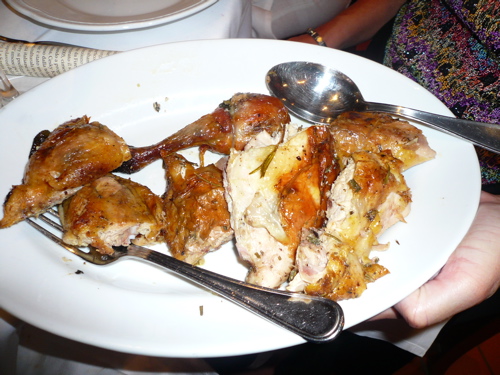 After the wild boar and pasta came the next course, which was roast Guinea fowl… 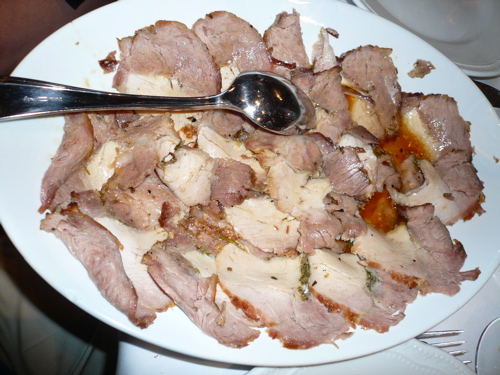 …followed by roast pork loin. Both were perfectly cooked, with crispy skin and juicy meat, and delicious. 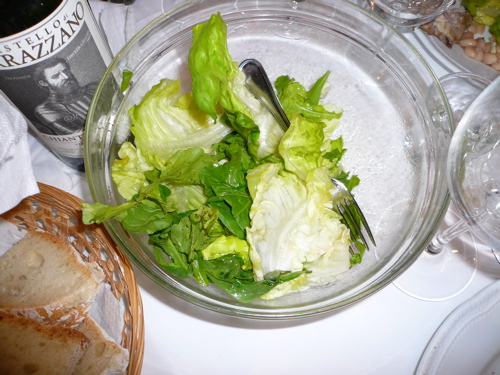 The last course of the meal proper was a salad of plain greens with a very light vinaigrette. 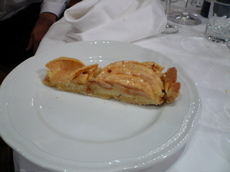 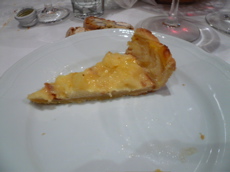 Then came dessert – a small piece of an apple tart. You can see the tart on the left and the proper low-carb way to eat it on the right. 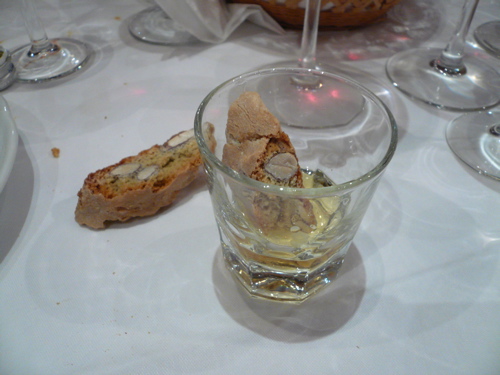 Finally, there was vin santo and biscotti, the traditional Italian dessert. Vin Santo (or vino santo as they call it) is a fortified white wine, which means that it has a significantly higher alcohol and sugar content than standard white wines. To enjoy it in true Italian fashion, you put a small almond biscotti in the glass of this wine and let it set for a few minutes, softening as it absorbs the wine. Then you eat the wine-laden biscotti. It is delicious. Not particularly low-carb, but truly delicious. And it’s a lot lower in carb than a lot of other desserts that aren’t nearly so elegant, easy to make or tasty. 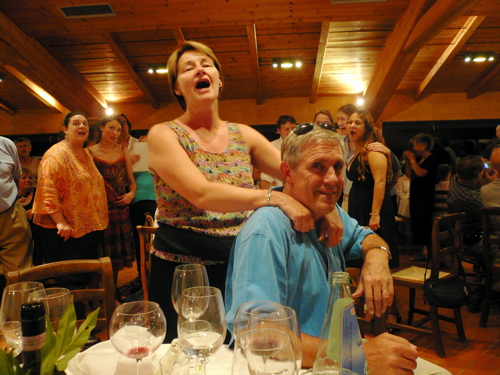 Finally, came the coffee, during which Donna Clara asked if the group would sing for her one last time. (She had been moved to tears when they had sung for her on the terrace during the pre-dinner festivities.) The singers stood at their respective tables and belted out a couple of numbers. The rest of us enjoyed the show.
As you can see from the photos and the description, this dinner was anything but high-carb, low-fat. And it didn’t contain much olive oil, the supposed backbone of the Mediterranean diet. In fact, the salad pictured above didn’t even have olive oil in the vinaigrette. Most of the calories in this particular meal came from pork fat, which is the real fatty backbone of the true Mediterranean diet, not olive oil.
I once shared a podium at a conference on diet held in Chicago about 15 years ago with Coleman Andrews, the erstwhile editor of Saveur magazine, now at Gourmet, I think. During his presentation on the composition of the real Mediterranean diet, he pointed out that the primary fat used in the Mediterranean was lard. Olive oil, he said, was too valuable as an export crop. After our Tuscan dinner, I have to say that I agree with him. Remember this the next time someone tells you to eat a Mediterranean diet for good health. And by all means, do eat a real Mediterranean diet, not what passes for a Mediterranean diet in the minds of most nutritionists. Remember the wise words of Emeril Lagasse: Pork fat rules!