A tax on soft drinks?

There is a giant conference taking place in Sydney, Australia right now where all the usual mainstream nutritional suspects are conferring, confabbing, and otherwise hobnobbing about the worldwide obesity epidemic. Any time this many self-important academic nabobs get together in an effort to solve important problems, you can bet that at least one, if not a dozen, moronic recommendations will be in the offing. The Sydney conference did not disappoint.

One of the presenters, Barry Popkin, from the University of North Carolina has made the recommendation that countries facing an obesity crisis should add a tax to sugary soft drinks to make them much more expensive. Much more expensive soft drinks would shift consumption to less sugary products. As Dr. Popkin put it

If you doubled the price … of a regular Coke, people would drink Diet Coke or water, or milk or juice or something.

Ignoring the fact that Dr. Popkin has himself castigated fruit juices as being no better than soft drinks in terms of sugar content, will taxing soft drinks mean people will consume less sugar?

It sounds reasonable, at least from an economic perspective, but will it really work? If it would reduce consumption of high-fructose corn syrup, I would be all for it, but I fear that it really isn’t that simple.

Those who cannot remember the past are condemned to repeat it.

Or, in Dr. Popkin’s case, those who never knew the past are condemned to figure it out the next time around. 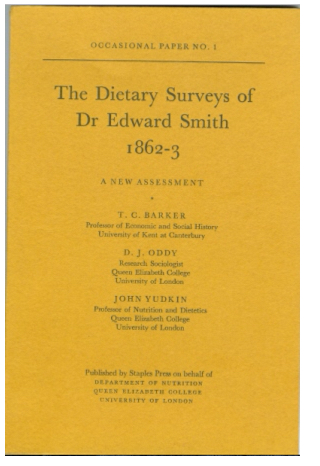 I posted a few weeks ago on some old nutritional research I had come across published in 1970 by researchers at the University of London. Said little book, which set me back about $30, is a report on the dietary studies of Dr. Edward Smith done in the early 1860s in various areas of England. These studies were the first comprehensive nutritional surveys ever done and are extremely revealing. At some point I plan to post on the entire survey, but today I want to look at the portion that is germane to a discussion of a soft drink tax.

When he first surveyed the various groups in 1861 the diets of the cotton workers reflected their higher levels of income. Their diets contained more calories and pretty much more of all the components surveyed. A depression swept through the area where all the cotton workers were employed in 1862, cutting their incomes by about half. The depression didn’t affect the other indoor workers nearly as much as it did the higher paid cotton workers. 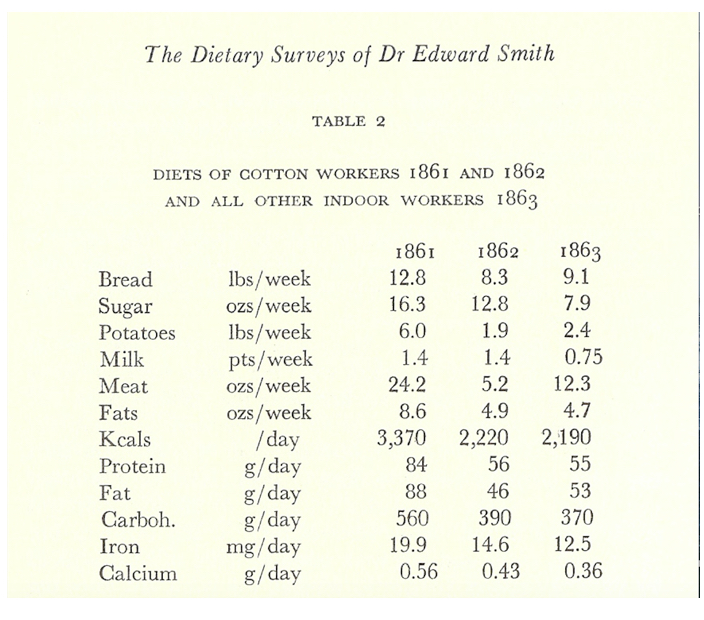 You can see from the chart above the impact the depression of 1862 had on the diets of the cotton workers. The first column is the diet that the cotton workers consumed in 1861 while they were earning a substantial income. The second column shows the change in diet as a consequence of reduced earnings during the depression of 1862. The third column shows the diet of other indoor workers in 1863 while the depression was still present. (I haven’t shown the other charts in the book showing that the diet of the other indoor workers prior to the depression was virtually the same as that shown in the third column.)

What does all this tell us that is relevant to the idea of a soft drink tax?

If you’ll look at the chart and compare the first column with the second, you will notice a substantial decrease in the amounts consumed in almost every category except for sugar (there is not much decrease in milk, but there wasn’t much to start with). Relative to every other category, sugar consumption decreased less with falling income. All the categories fell to the point that they were similar to that of the other lesser-paid indoor workers.

Except for sugar and meat.

There was a small reduction in sugar intake, but a large reduction in meat consumption. They ended up eating far less meat than the poorer workers.

What this tells us is that once people started making more money and developed the taste for sugar (which was relatively expensive back then) they didn’t want to let it go. When times got hard, they continued to spend on sugar and got rid of the meat, bread and potatoes.

As the authors of this report put it

Whilst the previously higher levels of bread and potatoes of the cotton workers fell to about the same levels as those of other indoor workers, sugar remained appreciable higher, and the meat and fats became much lower. The effect of these and other changes was to reduce the amount of calories and nutrients in the diet to a level that was now quite close to the average of the indoor workers. The sugar consumed during the depression consisted in a significantly higher proportion of treacle than that consumed before the depression–about 40 percent of the total compared with less than 25 percent. It was mostly spread on bread, so it was used as a substitute for butter rather than for solid sugar in drinks and cooking.

In nutritional terms, it would have been better if some of the money spent on sugar had been diverted to buy bread and potatoes, since this would have given them very many more calories for the same money, as well as providing some protein, vitamins and minerals, which sugar lacks entirely. In fact, however, we find that a taste for the sweetness of sugar tends to become fixed. The choice to eat almost as much sugar as they used to do, whilst substantially reducing the amount of meat, reinforces our belief that people develop a liking for sugar that becomes difficult to resist or overcome.

So, based on the experiences of the cotton workers, I suspect the same thing would happen were we to levy a huge tax on sugary drinks. The sugar junkies of today would simply continue to feed their habits at the expense of more nutritious foods as did the sugar junkies in 1862.

I suspect that the outcome of this tax, were it ever to be initiated, would be another example of the law of unintended consequences at work.

In my opinion, a much better way to attack the problem is with education.