The last few studies I’ve posted on here seem to have been designed by their authors to show that low-carb diets aren’t all they’re cracked up to be. Of course none of these studies have used real low-carb diets – they’ve all used diets that are called low-carb, but really aren’t. They’ve set up a low-carb straw man, knocked it down, then crowed about it. These antics have left us all longing to see a study using a real low-carb diet.
Fate has dropped two studies into our hands that clearly demonstrate the superiority of low-carbs diets when matched against the high-fiber, high-cereal diet beloved of so many in the nutritional establishment and even against low glycemic index (Low-GI) diets.
In the same couple of week period two studies came out – one you’ve probably read about; the other you likely haven’t. By combining the data from these studies, we can see how these three diets match up.
The first study was published in the Dec 17 edition of the Journal of the American Medical Association (JAMA) and was a comparison of the high-cereal, high-GI diet to the low-GI diet. You can get an overview of the study by reading the JAMA press release:

The gist of this study is that diabetic subjects on the low-GI diet improved minimally as compared to those on the high fiber, high-GI diet.  As I’ve written in this blog and lectured on numerous times, I’m not a big believer in the virtues of the glycemic index.  As this JAMA study demonstrates, subjects switching to lower-GI carbs while keeping their overall carb intake the same gain slight improvement, but not enough, in my estimation, to make the change worthwhile.  In my opinion it is the overall carb intake that counts more, not simply switching to lower-GI carbs.

At about the same time the JAMA paper came out, a study performed at Duke University comparing a low-GI diet to a real low-carb diet appeared in the online journal Nutrition & Metabolism. Here is the Duke press release about that study:

LOW CARB DIETS PROVE BETTER AT CONTROLLING TYPE 2 DIABETES
Which works better at controlling type 2 diabetes: a diet low in carbohydrates or one that focuses on carbohydrates with a low glycemic index? That’s what Duke University Medical Center researchers sought to uncover when they compared the two over a six-month period.
Their findings, published online in Nutrition and Metabolism, indicate that a diet low in carbs with the lowest possible rating on the glycemic index scale leads to greater improvement in blood sugar control, according to lead author Eric Westman, MD, director of Duke’s Lifestyle Medicine Program. And, patients who followed the diet experienced more frequent reductions, and in some cases elimination, of their medication used to control type 2 diabetes.
“Low glycemic diets are good, but our work shows a no-glycemic diet is even better at improving blood sugar control,” he says. “We found you can get a three-fold improvement in type 2 diabetes as evidenced by a standard test of the amount of sugar in the blood. That’s an important distinction because as a physician who is faced with the choice of drugs or diet, I want a strong diet that’s shown to improve type 2 diabetes and minimize medication use.”
Eight-four volunteers with obesity and type 2 diabetes that were randomized to either a low carbohydrate ketogenic diet (less than 20 grams of carbs/day) or a low-glycemic, reduced calorie diet (500 calories/day). Both groups attended group meetings, had nutritional supplementation and an exercise regimen.
After 24 weeks, their glycemic control was determined by a blood test that measured hemoglobin A1C, a standard test used to determine blood sugar control in patients with diabetes. Of those who completed the study, the volunteers in the low-carb diet group had greater improvements in hemoglobin A1C and diabetes medications were reduced or eliminated in 95 percent of the volunteers, compared to 62 percent in the low-glycemic group. The low carb diet also resulted in a greater reduction in weight
“It’s simple,” says Westman. “If you cut out the carbs, your blood sugar goes down, and you lose weight which lowers your blood sugar even further. It’s a one-two punch.”
While the diet is easy for some to follow, it is not easy for everybody. “This is a therapeutic diet for people who are sick,” says Westman. “These lifestyle approaches all have an intensive behavioral component.  In our program, people come in every two weeks to get reinforcements and reminders. We’ve treated hundreds of patients this way now at Duke and what we see clinically and in our research shows that it works.”

The gist of this study is that those diabetic subjects following an honest-to-God low-carb diet achieved dramatic improvement as compared to those who simply switched to a low-GI diet, but kept their carb intake high.

Now, as you might expect, knowing as we all do the propensity for the mainstream media to ignore studies showing the superiority of the low-carb diet while glorifying carbs, the New York Times picked up on the JAMA press release, but ignored the Duke press release.  If you read the gushing Times article, it makes it sound like the low-GI diet absolutely stomped the high-GI diet. The truth is a little different, however, because the differences between them were minimal.
I went to the trouble of pulling the data from both studies and putting it in spreadsheet form so that it could be compared side by side. Then I decided to go to a little more trouble and display it graphically so that the differences could be seen much better.  What follows is a series of graphs comparing the high-GI diet on the left to the two low-GI diet groups in the middle (JAMA low-GI study on the left and the Nutrition & Metabolism low-GI diet study on the right) and to the low-carb diet on the right. The light-colored bar represents the value at the beginning of the study for the parameter under question and the darker-colored bar represents the changes after 6 months on the various diets.
First, let’s look at the amount of weight lost by the subjects over 6 months on the various diets. 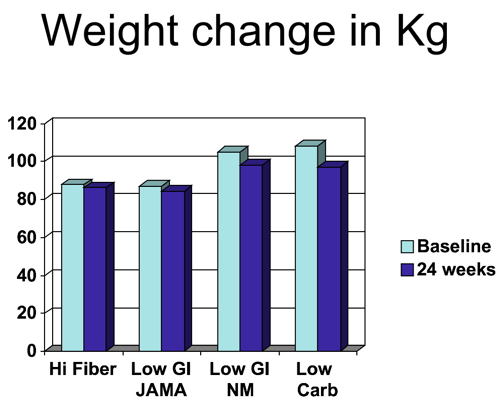 As you can see, the subjects on the low-carb diet lost the most weight despite the fact that they were not counting calories, only carbs.  This is especially impressive when you consider that all the groups except for the low-carb group were encouraged to count calories and reduce food intake.  The low-carb group was instructed to restrict carbs to below 20 gm per day but to otherwise eat all they wanted.
Let’s look next at HgbA1c, a measure of blood sugar control.  The lower the HgbA1c, the lower the blood sugar.  Since all the subjects in both these studies were diabetic, all started with high HgbA1c levels. 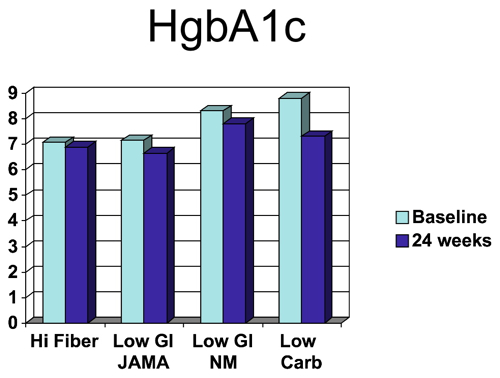 The low-carb diet brought about a much greater lowering of HgbA1c than did either the high-fiber, high-GI diet or the low-GI diet, both of which are routinely recommended for people with diabetes.  Makes you wonder, doesn’t it?
Next, let’s consider total cholesterol.  It’s a pretty much meaningless number, but it was included in the data, so I’ll include it here. 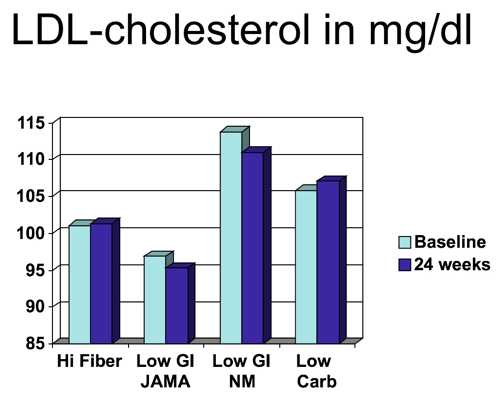 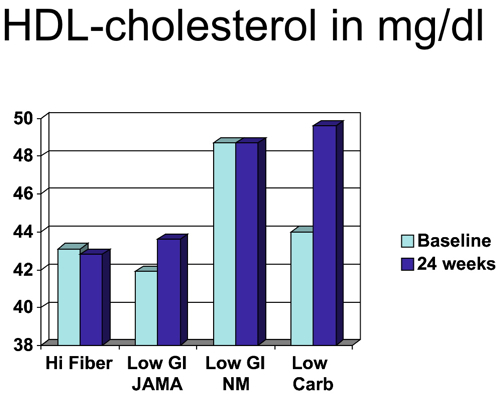 We can certainly see where some of the gain in total cholesterol came from in the low-carb group.   It came because they increased their HDL-cholesterol so much.   The other groups either held steady or went up minimally whereas the low-carb group showed a huge increase in HDL-cholesterol, which also correlates with larger LDL-cholesterol particle size.
What about triglycerides?   Most readers of this blog can predict what happened there.  Let’s look. 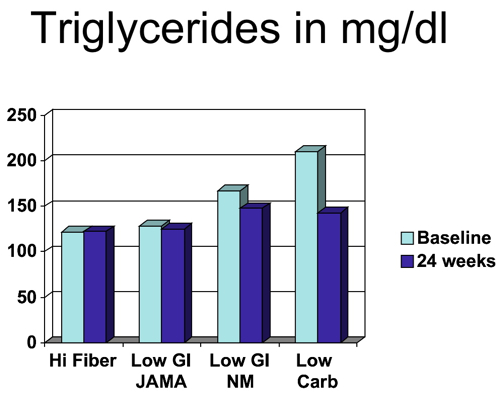 Once again the low-carb diet brings about great results.  If we look at the more important diastolic measurement, we find even better news. 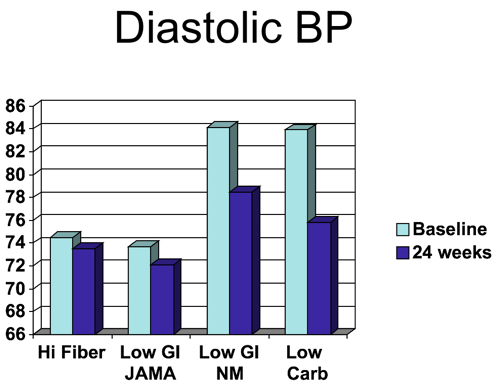 Yet again the low-carb diet emerges the champion.
These graphs should give you an idea of how much more potent the low-carb diet is as a tool to deal with diabetes than are low-calorie, high-fiber, high-GI diets and low-calorie, low-GI diets, both of which are the mainstays of mainstream diabetic diet therapy.
Remember, all of these studies were done on diabetic patients and all were conducted over a 6 month period, so were are comparing apples with apples here.  Based on the data shown in these graphs, the low-carb diet emerged the champion by a long shot. If these graphs told the whole story, the low-carb diet would be the hero.  But the graphs don’t tell the whole story.  Why not?  Because large numbers of subjects in all these study groups were on oral anti-diabetic medicines and/or insulin.  What happened to medication doses as these subjects progressed through the 6 month study.
The JAMA paper tells us the following about the subjects in the high-fiber, high-GI and the low-GI diets:

…of the 11 participants who reduced their diabetes medications, all 6 who had clear evidence of hypoglycemic symptoms or low blood glucose levels were taking low–glycemic index diets.

So, 11 study subjects were able to reduce their medications during the study.  This doesn’t seem like a lot when you consider that out of 210 study participants 208 were on diabetic medications at the start.  Virtually all were on antidiabetic meds of one kind or another and 11 of them were able to reduce these medicines.  Eleven out of 208 means that 5 percent of the subjects on these two diets reduced their diabetic drugs.
If we look at the low-carb study, we find a much greater rate of success:

To really get a feel for what happened with these subjects, let’s look at a table from the study showing insulin and medication reductions in those subjects who were on insulin therapy before starting the study. 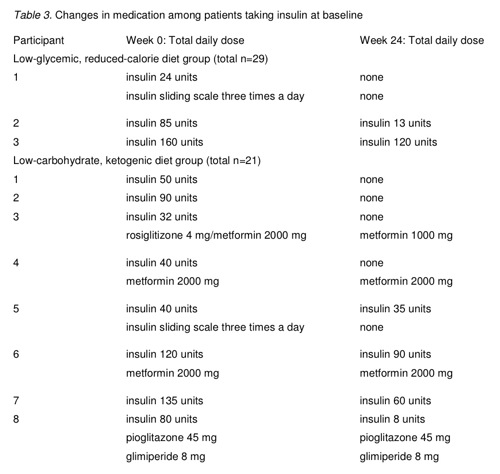 A quick study of this table shows us that 3 subjects out of 29 taking insulin in the low-GI group reduced or discontinued insulin whereas 8 out of 21 reduced or eliminated insulin in the low-carb group.
I would say that given the substantial improvements in virtually all the parameters demonstrated by the graphs combined with the enormous difference in improvement in those taking medications, the low-carb diet didn’t just perform as a star, it was a super star.
It’s saddens me to think about how many doctors don’t know or understand these data and will continue to treat their patients in a much less effective manner, no doubt leading to more complications, greater medication usage and shorter lives.  It really is a shame.