A request for information 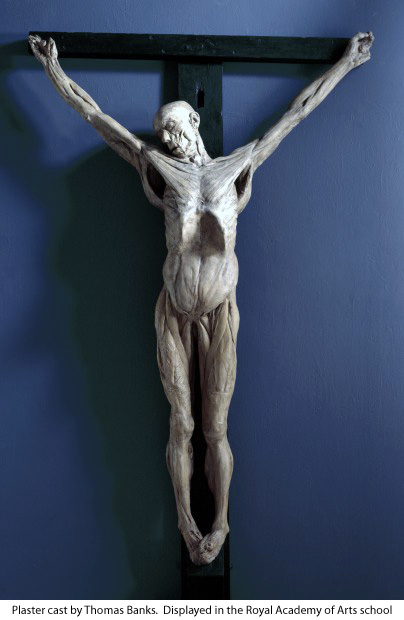 The grisly plaster cast pictured above of the flayed corpse of a hanged murderer has quite a history.

On October 2, 1801, Mr James Legg shot one William Lambe to death in the latter’s bedroom.  Apparently the 73 year old Mr. Legg had been nursing a grudge against Lambe for some time.  As Mr. Lambe was awakening on the morning of Oct 2, Mr. Legg, gun in hand, confronted him, thrust a second pistol at him and challenged him to a duel to settle their differences.  Mr. Lambe tossed the proffered pistol out the door of his room whereupon Mr. Legg fired upon Mr. Lambe, killing him instantly.

Mr. Lambe’s wife witnessed the murder, but Mr. Legg admitted to it as well.  His trial took place on Oct 28, 1801.  He was sentenced to death, and his execution by hanging took place on Nov 2, a month to the day after the deed was done.  Justice was swift in those days.

So far, it’s just a run of the mill murder, but here’s where it gets interesting. During the time Mr. Legg was awaiting his trial and subsequent execution, three members of the Royal Academy of Arts – sculptor Thomas Banks and painters Benjamin West and Richard Cosway – had been debating the notion that artistic depictions of the crucifixion of Christ had been portrayed unrealistically.  They wondered what an anatomically correct crucifixion would really look like.

The three contacted a surgeon, Joseph Carpue, to help them with their anatomical inquiries.  At that time the only corpses legally available for dissection were those of convicted criminals who had been executed.  Carpue knew of the murder by Legg since both the perp and the victim were pensioners at Chelsea Hospital, where Carpue practiced.  Using his influence, Carpue was able to get possession of Legg’s corpse after his execution.

On the day of the execution, a small building was put up near the the site.  A cross was made and at the ready.  When the fresh corpse was cut from the gallows and transported to the waiting team, they stripped Legg, nailed him to the cross, and stood it up, allowing his still warm body to fall into the anatomically correct crucifixion position.

After the body had cooled and rigor mortis had set in, Banks, the sculptor, made a cast of the body.  Then the body was moved (maintaining its ‘correct’ position) to Carpue’s operating theatre where he proceeded to flay (remove the skin) from the corpse of the unfortunate Mr. Legg.  Banks made yet another cast, this one showing the position of the musculature in an anatomically correct crucifixion.  This is the cast pictured at the top of this post.

In an effort to keep this post in the realm of the nutritional, I might point out that Mr. Legg was definitely not obese.  He was probably pretty standard weight for his time.  He would have indeed stood out at Disneyland.

Now that you’ve had the history lesson, let me give you my request.  When MD and I opened our first little medical clinic years ago, a neurosurgeon friend of ours gave us a book on this gruesome episode.  It was a small book, well bound, and from a small press, the name of which I can’t remember.  We kept the book in the medical reference library in the clinic.  As the clinic grew, other doctors began working there with us. We finally grew out of our little clinic, and as I was packing the reference books to move, I realized that the book on the Legg affair had gone missing.

I’ve kept my ear to the ground since figuring that I would run across another copy I could pick up, but, as of yet, I haven’t.  I don’t remember the title of the book, nor do I remember the publisher.  But, I would love to have another copy.  So, if anyone happens to know the name of this book or even the publisher, drop me a note through the comments.  I would really appreciate it.

I happened to stumble across the photo of the cast of the flayed Mr. Legg while searching for something else this weekend.  I spent about three hours searching online, but alas had no luck finding the book. Nor any photos other than the one above. But I did find an account of Mr. Legg’s trial, such as it was, complete with verbatim testimony of various witnesses.

You can read it in its entirety here in the Proceedings of the Old Bailey.

I love the language they used two hundred years ago.  Here is an example.

The prosecuting attorney, a Mr. Fielding, begins his questioning of the victims wife:

You are the wife of the deceased; tell the story of the melancholy event that took place on the 2d of October?

Mrs. Lambe then gives her eyewitness version of the event:

I got up in the morning a little before seven; Mr. Legg was walking about the common room, swearing, and quite in an ill humour, I thought; I asked him what was the matter, when he began to swear the more, and said, I will turn you out of the room, if you speak another word; my husband was then in bed and asleep; I thought I heard him stirring, and opened the door to see; he had just got out of the bed, when the prisoner rushed past me, and put a pistol into his hand; he took it, turned it about, and looked at it, and said, what is this for; the room was dark, and then he threw it into the common room; my husband had just put on a little flannel waistcoat, and stood up against the door; the prisoner then, after my husband had thrown the pistol away, rushed up immediately, and fired at him, as he saw him through the glass door; when he had done so, he looked at me, and said, I have done it; I saw the blood coming out of his breast, and I cried out, murder; he fell directly; and expired; he endeavoured to call my name, but could not.

A bit later in her testimony, Mr. Fielding asks her if there was any ill-will between her husband and Mr. Legg.

God knows what ill-will he had, but my husband had none towards him; I took him to be a very solid man, for he washed his own linen, cooked his own victuals, and took the sacrament regularly, so I thought he was a man rather better than what he has turned out.

So, if anyone has info on the book about this ‘melancholy event,’ please send it my way.  If I end up with the much-coveted book in my hand, I’ll see that whomever tips me off first gets a free, autographed copy of our new book when it comes out next month.  Thanks in advance.