Share0
Tweet0
Share0
In 1981 MD and I read a book that changed our lives.  I don’t know why because I didn’t have a particular interest in paleontology or anthropology at the time, but I picked up a copy of Lucy: the Beginnings of Humankind by Donald Johanson.  The book sat around the house for awhile before I found the time to read it, but when I started reading, I couldn’t quit.  It was an absolutely riveting read.
I carried the book with me and read it everywhere.  At the time, I was doing a lot of emergency room medicine, so I took the 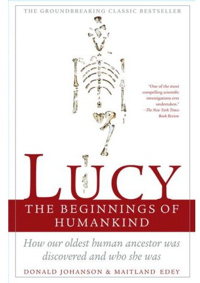 book along on one of my 24 hour shifts.  As luck would have it, I had a slow night, so instead of sacking out as I would have usually done, making sure I got some shut eye before the inevitable car wreck or gunshot wound showed up to shatter my peace, I read Lucy.  I finished it sometime during the middle of the night and the couldn’t get back to sleep for thinking about it.  I couldn’t wait to get home to MD and tell her about it and force her – at gunpoint, if necessary – to read it.  I couldn’t live with myself if I were this enthusiastic about something and had no one to discuss it with.
She started reading it, and before I knew it, she was as fired up about it as I was.  She read a lot of it in bed before we went to sleep, and our conversations went much like this:
Me: What part are you reading?
MD: I’m at the part about the ‘R’ and ‘K’ factors.
Me: Isn’t that cool.  Then on to a general conversation between us about R and K.
MD: (Exasperated) Let me get back to the book.
Ten minutes later.
Me: What part are you reading now?
When she finally finished, it seemed that Lucy was all we could talk about for about a month.  Just around the time we finished the book, the Little Rock public library had its big, once-a-year, friends of the library sale.  People donate old books, new books, magazines, and any and all kinds of reading matter to this fundraising event.  I knew that there were usually a lot of old medical and scientific journals there, so MD and I headed on down.  When we got there, we hit pay dirt.  We found EVERY one of the original journals that contained all the papers written on the discovery of Lucy and the anthropological and paleontological work to figure out what she actually was.
It has just occurred to me in my stream of consciousness writing, driven by my excitement from just thinking about those days, that, for those who don’t know, I haven’t explained who Lucy is.  Lucy was a little upright walking creature who lived about 3.2 million years ago in what is now

Ethiopia.  Anthropologist Donald Johanson and is team found her almost complete fossilized skeleton while on a dig there about 30 years ago.  Although her skeleton (seen at right) might not look like it’s almost complete, it represents a huge find paleontologically.  When you consider that many paleontologists go their whole careers and find only a small bone or two.  Over a career.  Lucy has most of her parts.  And those she doesn’t have on one side, she has on the other, so it’s relatively easy to reconstruct her entire skeleton.
The book Lucy details not only Lucy’s discovery, but the history of paleontology until that point (that part probably sounds dreadful, but it’s truly a wonderful read), and all the work to figure out what Lucy really was and where she fit into the hominid spectrum.  At the time she didn’t fit into any of the categories of hominids that were known, so Johanson and team ended up calling her Australopithicus afarenses, the forerunner to Australopithicus africanus.  The descriptions of how tooth and jaw structure were used to place her where she belongs sound like boring reading, but they aren’t at all.  That part of the book was where I got my first notions of the idea that there might be a diet we had evolved to eat.
MD and I swore to one another that somehow, someway we were going to by God see Lucy’s actual skeleton (it wasn’t really her actual skeleton, it was a fossil of her skeleton), even if we had to go to Ethiopia to do it.  Not long after we made this vow, we learned that an entire Lucy exhibit was going to be presented at the Museum of Natural History in New York.  Neither of us had ever been to New York at that time, but we made plans to go.  When the exhibit opened, we were there.  And a fabulous exhibit it was.  It had the Taung child skull, which figures prominently in the history of man, and many of the other famous fossils we had read about.  When we finally got to Lucy and read the little plate on the display case with her skeleton, we were devastated to learn that it wasn’t really Lucy’s skeleton we were seeing, but a reproduction of Lucy’s skeleton.  The real Lucy’s skeleton was still in Ethiopia where it had been repatriated.  And the Ethiopian authorities weren’t about to let her go on tour.
We were mightily disappointed and figured we would probably have to go to Ethiopia to see Lucy if we were ever going to see her in the flesh, so to speak.
But a couple of days ago we were driving along in Seattle and I noticed a sign advertising a Lucy exhibit at the Pacific Science Center.  I found out that the exhibit was called Lucy’s Legacy: The Hidden Treasures of Ethiopia.  The brochure promised that the exhibit

provides visitors with an extraordinary opportunity to come face to face with Lucy, the oldest, most complete, and best preserved adult fossil of any erect-walking human ancestor.

Hmmm, thinks I.  Could it really be?  I worried about the styling of the exhibit.  Lucy’s Legacy?  What does that really mean.  Hidden treasures of Ethiopia?  What hidden treasures?  We were in the midst of an extremely busy few days, but we didn’t want to miss out if this truly was an opportunity to see the real Lucy.  We got tickets and showed up at the appointed time (they were letting people in in 15-minute increments).
When we got in, we walked through exhibit after exhibit of Ethiopian history, Ethiopian languages, Ethiopian religion, Ethiopian writing, Ethiopian art, Ethiopian everything, but no sign of Lucy.  As I was beginning to despair, we finally rounded a corner and there was at least an exhibit on hominid fossils.  We went through that part of it and finally came to the same reproduction of Lucy (or at least one that looked the same) as we had seen in New York.  Then we found, in a case in a darkened room, the actual, real, honest-to-God fossil of Lucy.  It was the same size and shape as the model we had seen, but was a different color.  Whereas the model looked kind of yellowish, the way old bones look, Lucy’s fossil was a grayish white.  It looked like, well, rock.  Which it is.
At any rate, now we don’t have to go to Ethiopia because the Ethiopian authorities made Lucy available to us.  Despite the fact that these authorities used Lucy to pimp for Ethiopia, we were damned glad to see her.
I can’t recommend the book Lucy enough.  It should be a part of every low-carbers library.  Once you read it, you will know what it means when you read that Australopithicus africanus had elevated levels of Carbon-13.  You will realize how far back in our lineage we were meat eaters.  And you will find out what happened to the branch of pre-humans who evolved down the plant-eating road.
The photo at the top of this post are of skulls and skull models in my library.  The one on the left is Australopithicus robustus, a branch that came to a bad end.  The skull next to that one is a mountain lion, the next is Homo habilis (a descandant of Lucy’s), and the one on the far right is a black bear.  Looming behind them all is the cave bear skull we wrote about in the Protein Power LifePlan.