A great meal in the Napa Valley

Share0
Tweet0
Share0
As I was sitting here at my desk this morning looking out at the view above, I decided that instead of writing on a scientific subject that would take several hours, I would put up a little food porn and go out and enjoy the weather.
When we were in Napa recently, we had several meals, one of which I mentioned previously as costing over $1400 for four. And when I mentioned it before, I complained bitterly about the price, which kind of overshadowed my entire Napa experience. What I didn’t mention was that the night before we had a stupendous meal at an extremely reasonable price.
We ate at Bistro Jeanty, a terrific little restaurant in Yountville, right across from where we were staying.
I started out with a fabulous heirloom tomato salad that I had already tucked into before it occurred to me to take a photo. The picture below shows the salad with a couple of bites gone. 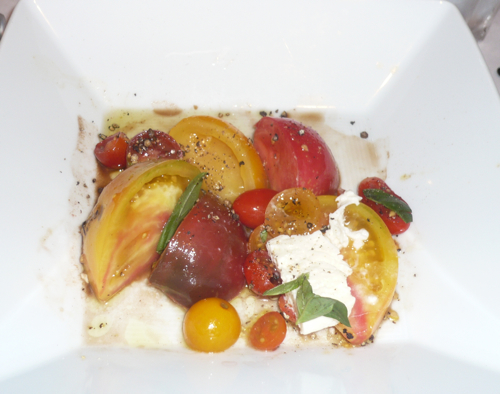 Then I moved on to the next course, which was a home-cured pork belly with a lentil balsamic vinegar and foie gras ragout. This dish was the envy of the table, and I had to fight the rest of the crew off. 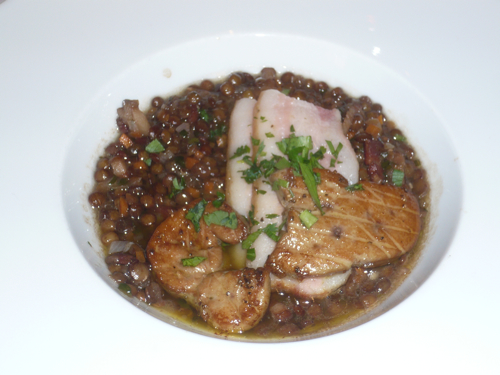 Now you may wonder about the lentils and the carb content of this dish. There are good carbs and there are bad carbs and there are excellent carbs. This dish falls into the last category. MD and I figured that there was about a third of a cup of cooked lentils in this dish, which the USDA lists as having about 7 grams of effective carbohydrate. And I’m telling you, combined with the pork belly and the foie gras, were the best 7 grams of carbs I ever consumed.
After this great dish, MD and I split two entrées. We had the steak tartare and the flank steak. 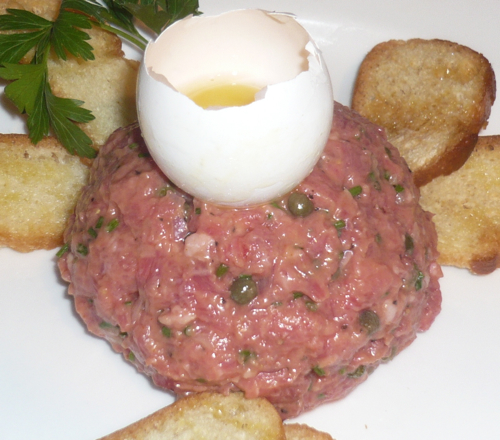 Here is what I really went after. Great bloody gobs of steak tartare. And in case you’re wondering, I did eat a couple of the little croutons that came with it, but only a couple. We figured that since they were so thin, each was probably about 3 grams of carb. Most of the steak tartare, however, I simply forked down. 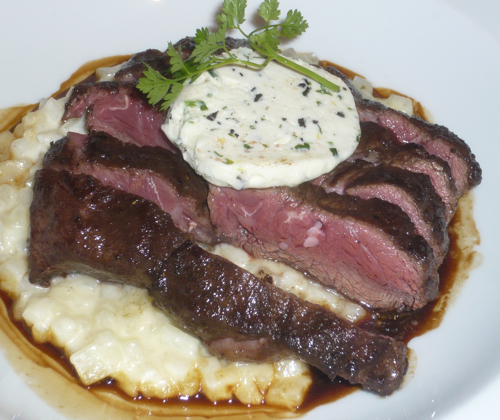 Here is the flank steak on a bed of potato risotto. And before you ask, no, we didn’t eat the potato risotto. We did taste it, however. It was delicious. MD is hard at work figuring out how it can be reproduced with celeriac. The steak was phenomenol. A bite or two of this followed by a bite or two of the steak tartare can’t be beat.
The other couple we were with split a dessert – MD and I had cheese.
We had a drink before dinner, a bottle of wine between the four of us, the meal and dessert for $244. $244 for four people for a meal like this on in Napa is truly reasonable in my book. The very next night we spent six times as much for half the food (or maybe a third the food), which I’m still sulking over. I’ll post on it in due course along with some photos.
While I’m at it, I’ll tell you about the place we stayed. We didn’t want to spend the $500 per night that we found most everywhere, so MD started looking online and found a little boutique kind of a hotel that was a bunch of railroad cars strung together. The rate was only $180 for two of the nights we stayed and $150 for the third. Here is the view from the outside. 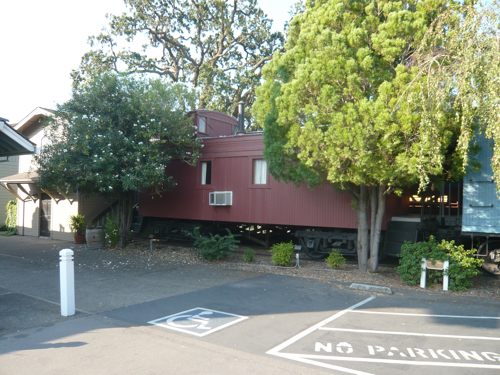 I was miffed because the ads said there was high-speed internet, which I assumed was wireless. I couldn’t get on other than sporadically (as I found out later, when I did get on, I was pirating someone else’s wireless service), and no one was in the office over the weekend. They had left the keys in an envelope with the business next door. When the staff showed up on Monday morning, I asked about the high-speed internet that had been advertised. The lady told me that instructions were on the envelope that contained the keys. Sure enough, when I went back and looked, there they were.
The place is clean and comfortable, but it is not a luxury hotel by any stretch. But if you want to go to the Napa Valley and not spend a fortune for lodging, the Napa Valley Railway Inn is not a bad choice. I’ll stay there again, especially now that I know how to use the internet. 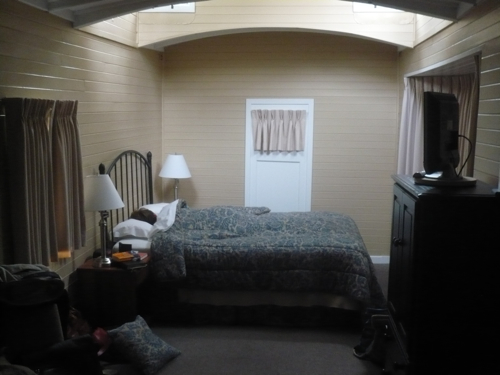 I got up early one morning to read. Here is MD still sacked out in the back of our caboose, so you can get the idea of what the inside looks like.
Disclaimer: I have no financial involvement with the Railway Inn or with Bistro Jeanty.