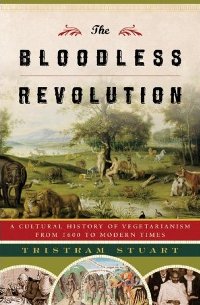 I’ve picked up the book The Bloodless Revolution: A Cultural History of Vegetarianism From 1600 to Modern Times a few times in bookstores and contemplated purchasing it, but its hefty 628 pages keeps asking me the question: Do you really have time to read this book when there are so many others that will provide you with much more learning screaming for your attention? So far the answer has been, No, but I have been sorely tempted.
The opening paragraph of today’s review in the New York Times Book Review, however, has really given me second thoughts.

In his tireless quest to wean England from meat in the early 18th century, the famously corpulent Dr. George Cheyne set out to poison the novelist Samuel Richardson. It may not really have been a premeditated attempt at murder. Richardson, who was a literary pioneer with his epistolary novels “Clarissa” and “Pamela,” so valued the good doctor’s advice that he had every letter Cheyne sent him transcribed and eventually bound into a volume, the way his novels’ heroines might cherish the communications of a handsome rake. And Dr. Cheyne, whom Tristram Stuart calls “the most influential vegetarian in 18th-century Britain” (as well as a man “renowned as a drunken fatso”), may also have really believed that the best way to treat the writer’s cold was with large doses of mercury.

“Famously corpulent”? “A drunken fatso”? A vegetarian? Maybe there’s more to this book than I thought. Maybe it isn’t just the typical vegetarian propaganda.  Perhaps a careful reading could enrich my armamentarium of pithy anecdotes, ready for deployment whenever I engage in debate with the many vegetarians that seem compelled to attack my position on meat eating.
I haven’t decided to make the purchase, yet, but I’m getting ever closer. If any readers out there have read it, I would appreciate any comments.