A bad week for statins 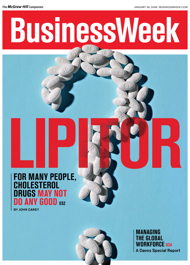 Despite the fact that statin drugs are the best-selling medications in history, accounting for some $40 billion plus in sales world wide last year, they had a very bad week this past week. And it looks like their scrutiny is going to pick up a little.
The Vytorin trial that finally came to light late last week kicked off the cascade of bad news. It appears that the combination of a statin and Zetia, despite lowering cholesterol levels by 40 percent more than a statin, was no more effective than the statin alone in preventing problems. Which would lead anyone with critical thinking skills to wonder about the hypothesis that LDL-cholesterol is really a problem.
The next day the New York Times, in an article that wasn’t all that anti-statin, started thusly:

For decades, the theory that lowering cholesterol is always beneficial has been a core principle of cardiology. It has been accepted by doctors and used by drug makers to win quick approval for new medicines to reduce cholesterol.
But now some prominent cardiologists say the results of two recent clinical trials have raised serious questions about that theory — and the value of two widely used cholesterol-lowering medicines, Zetia and its sister drug, Vytorin. Other new cholesterol-fighting drugs, including one that Merck hopes to begin selling this year, may also require closer scrutiny, they say.

Dr. Steven E. Nissen weighed in with his interview with Katie Couric on CBS that I posted earlier.
And the Wall Street Journal in it’s Health Blog anticipated a slew of lawsuits against the makers of Vytorin and maybe other statins to follow.
But the big daddy of them all has yet to hit the newsstands but has already been blasted over the internet. The next issue of Business Week, due to hit the stands next Monday, has been up online for the past few days, and it contains several articles, including the cover article, that are devastating for the makers of statin drugs.
The cover article titled Do Cholesterol Drugs Do Any Good starts right off in lock step with what I wrote in my Queen Mother of all statin posts a year or so ago. The Business Week piece starts with an interview with James M. Wright, a professor at the University of British Columbia and the director of the Canadian government-funded Therapeutics Initiative, an agency that analyzes drug data to see how well they actually work. Dr. Wright had one of his patients – Martin Winn – on a statin for a mildly elevated cholesterol level when the light bulb flashed on.

Wright saw, the drugs can be life-saving in patients who already have suffered heart attacks, somewhat reducing the chances of a recurrence that could lead to an early death. But Wright had a surprise when he looked at the data for the majority of patients, like Winn, who don’t have heart disease. He found no benefit in people over the age of 65, no matter how much their cholesterol declines, and no benefit in women of any age. He did see a small reduction in the number of heart attacks for middle-aged men taking statins in clinical trials. But even for these men, there was no overall reduction in total deaths or illnesses requiring hospitalization—despite big reductions in “bad” cholesterol. “Most people are taking something with no chance of benefit and a risk of harm,” says Wright. Based on the evidence, and the fact that Winn didn’t actually have angina, Wright changed his mind about treating him with statins—and Winn, too, was persuaded. “Because there’s no apparent benefit,” he says, “I don’t take them anymore.”

As I reported in my post the only evidence that statins produce any decrease in all-cause mortality is in men under the age of 65 who have established heart disease. For women of all ages with and without heart disease and for men of all ages without heart disease, these drugs don’t bring about a decrease in all-cause mortality.
And in that small subset of people for whom they do work – men under the age or 65 with a history of heart disease (not a history of high cholesterol, but a documented history of having experienced a heart attack), the evidence is that they don’t work all that well.
What do you mean they don’t work all that well? Robert Jarvik tells us in the ubiquitous Lipitor ads that the drug reduces the risk of heart disease by 36 percent in these people.

The dramatic 36% figure has an asterisk. Read the smaller type. It says: “That means in a large clinical study, 3% of patients taking a sugar pill or placebo had a heart attack compared to 2% of patients taking Lipitor.”
Now do some simple math. The numbers in that sentence mean that for every 100 people in the trial, which lasted 3 1/3 years, three people on placebos and two people on Lipitor had heart attacks. The difference credited to the drug? One fewer heart attack per 100 people. So to spare one person a heart attack, 100 people had to take Lipitor for more than three years. The other 99 got no measurable benefit. Or to put it in terms of a little-known but useful statistic, the number needed to treat (or NNT) for one person to benefit is 100.
Compare that with, say, today’s standard antibiotic therapy to eradicate ulcer-causing H. pylori stomach bacteria. The NNT is 1.1. Give the drugs to 11 people, and 10 will be cured.
A low NNT is the sort of effective response many patients expect from the drugs they take. When Wright and others explain to patients without prior heart disease that only 1 in 100 is likely to benefit from taking statins for years, most are astonished. Many, like Winn, choose to opt out.
Plus, there are reasons to believe the overall benefit for many patients is even less than what the NNT score of 100 suggests. That NNT was determined in an industry-sponsored trial using carefully selected patients with multiple risk factors, which include high blood pressure or smoking. In contrast, the only large clinical trial funded by the government, rather than companies, found no statistically significant benefit at all. And because clinical trials themselves suffer from potential biases, results claiming small benefits are always uncertain, says Dr. Nortin M. Hadler, professor of medicine at the University of North Carolina at Chapel Hill and a longtime drug industry critic. “Anything over an NNT of 50 is worse than a lottery ticket; there may be no winners,” he argues. Several recent scientific papers peg the NNT for statins at 250 and up for lower-risk patients, even if they take it for five years or more. “What if you put 250 people in a room and told them they would each pay $1,000 a year for a drug they would have to take every day, that many would get diarrhea and muscle pain, and that 249 would have no benefit? And that they could do just as well by exercising? How many would take that?” asks drug industry critic Dr. Jerome R. Hoffman, professor of clinical medicine at the University of California at Los Angeles.

So even those for whom the statin drugs do show some benefit, that benefit just isn’t all that much in the great scheme of things. And if this tiny, tiny benefit is all that is shown in those for whom the drugs are beneficial, why in God’s name would anyone not in this group even think about taking these drugs? Yet they are prescribed by the millions for just those people. Young people, old people, people who have never had documented heart disease, people whose only problem is a mildly elevated cholesterol level are being browbeaten by their physicians to to on these drugs that are not particularly benign. And with no evidence to prove that the drugs do anything at all to help. It is shameless.
This excellent article should be read in its entirety by anyone contemplating a statin drug. And the two accompanying articles should be read as well. One discusses the many side effects of statins that all too many prescribing physicians want to pretend don’t exist.

In clinical trials of statins, side effects were relatively rare. But many doctors believe they are more common in the real world, afflicting perhaps as many as 15% of patients. After muscle aches, prominently mentioned on Lipitor’s label, common complaints include cognitive problems ranging from mild confusion to loss of memory. Former astronaut and retired family doctor Duane Graveline says that he “descended into the black pit of amnesia” both times he was put on Lipitor, prompting him to write a book and set up a Web site on statins’ side effects.

The other gives the lie to the idea that statins are protective against Alzheimer’s disease.
The sad, sad part of this story as far as I’m concerned is that it has taken the business press instead of the medical press to expose the statin story. Why? The article says it all.

The NCEP’s 2004 guideline update garnered headlines by recommending lower targets for bad cholesterol, which would put more Americans on the drugs. But there was also a heated controversy in the medical community over the fact that 8 of the 9 experts on the panel had financial ties to industry. “The guideline process went awry,” says Michigan State’s Barry. He and 34 other experts sent a petition of protest to the National Institutes of Health, saying the evidence was weak and the panel members were biased by their ties to companies.

As I wrote: sad, sad, sad.
But if there is even one little flicker of humor in this entire situation, it can be found in the many full-page ads the makers of Vytorin have been running in the New York Times and other national newspapers the past week or so in an effort to talk people out of quiting their drugs.
Says the ad:

Are you taking Zetia or Vytorin?
If so, you may be worried about recent news stories questioning the benefits of these medicines…on the basis of a single study that has generated a lot of confusion.

This is a fine load of bull coming from pharmaceutical companies that are more than willing to have you taking all these medications on the basis of a single study. I guess it all depends upon whose ox is getting gored.