In reading through Gary Taubes’ book Good Calories, Bad Calories I came upon the following dialog that I found all too familiar. It took place in 1973 during the first hearing of George McGovern’s Senate Select Committee on Nutrition and Human Needs. A number of speakers made presentations on the adverse effects of carbohydrates on human health. British nutritional researcher John Yudkin was one of the presenters.

Yudkin blamed heart disease exclusively on sugar, and he was equally adamant that neither saturated fat nor cholesterol played a role. He explained how carbohydrates and specifically sugar in the diet could induce both diabetes and heart disease, through their effect on insulin secretion and the blood fats known as triglycerides. McGovern now struggled with the difficulty of getting some consensus on these matters.
“Are you saying that you don’t think a high fat intake produces the high cholesterol count?” McGovern asked Yudkin. “Or are you even saying that a person with a high cholesterol count is not in danger?”
“Well, I would like to exclude those rare people who have probably a genetic condition in which there is an extremely high cholesterol,” Yudkin responded. “If we are talking about the general population, I believe both those things that you say. I believe that decreasing the fat in the diet is not the best way of combating a high blood cholesterol…I believe that the high blood cholesterol in itself has nothing whatever to do with heart disease.”
“That is exactly the opposite what my doctor told me,” said McGovern.

I know just how Yudkin must have felt. I’ve had the same conversation with patients countless times. 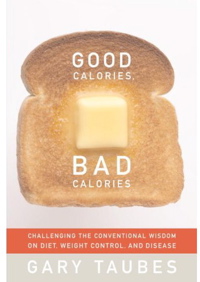 Gary’s book is filled with accounts of low-fat advocates clinging to the low-fat hypothesis despite the lack of evidence that it was valid. In fact the evidence had been accumulating showing that dietary fat didn’t have anything to do with heart disease in particular and that it was rapidly losing its status as a risk factor for all diseases in general. The low-fat advocates tenaciously clung to any research – no matter how flimsy – showing any connection with fat consumption, especially saturated fat consumption, and disease while totally disregarding much stronger evidence that fat wasn’t the problem. Papers presenting data showing the lack of causality between fat consumption and disease or data indicating that carbohydrates might be the problem were written off as inconclusive while totally inconclusive data was not only accepted as gospel, but presented as a smoking gun.
Many of these low-fat researchers will read Taubes’ thoroughly researched book that meticulously lays out how and why they went wrong and instead of saying ‘Geez, we really blew that one,’ they’ll say his whole book is BS and if they could just get the right study they could prove to the world that they have really been right all along.
Sad but true.
Reminds me of a line from one of my favorite songs written by John Lennon:

Living is easy with eyes closed, misunderstanding all you see.*

In my years of experience I’ve always been amazed at this ability of many extremely smart people to blind themselves to the evidence staring them in the face. I read a book recently that has helped me to understand.
When MD and I were packing for Europe I rooted through my pile of unread books looking for paperbacks that would travel easily. I found a book that I had ordered a while back on the basis of a good review but hadn’t read. It was the right size so I threw it in my carry on. It turned out to be one of the better books I’ve read in a long, long time; it shed a lot of light on how people can maintain their set opinions in the face of mountains of evidence that they’re dead wrong.
The book is titled Stumbling on Happiness, and was written by a Harvard professor of psychology named Daniel Gilbert. I didn’t read the book 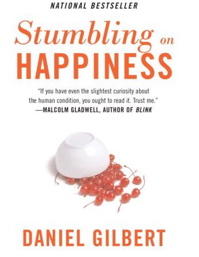 when I first got it because I was led astray by the title. I – logically enough – assumed the book was about increasing one’s happiness quotient by accident, and since I’m a happy enough guy anyway, I didn’t figure stumbling onto a little more would make my life better by enough to invest the time in reading. Boy, was I wrong. The book isn’t really about happiness much at all; it’s about how the brain works to deceive us in all kinds of situations. And, au contraire to most books written by Harvard professors, this one is a real gem. It’s well written, funny, easy to read, and crawling with valuable information about how we all think. I can’t recommend this book highly enough. Get it while you’re waiting for the Taubes, and you’ll be better able to understand much of the stupidity he writes about and the stupidity you see all around you and the stupidity that we (you and, sadly, I) often exhibit oursleves.
Here is an excerpt to the point:

When facts challenge our favored conclusion, we scrutinize them more carefully and subject them to more rigorous analysis. We also require a lot more of them. For example, how much information would you require before you were willing to conclude that someone was intelligent? Would their high school transcripts be enough? Would an IQ test suffice? Would you need to know what their teachers and employers thought of them? Volunteers in one study were asked to evaluate the intelligence of another person, and they required considerable evidence before they were willing to conclude that the person was truly smart. But interestingly, they required much more evidence when the person was an unbearable pain in the ass than when the person was funny, kind, and friendly. When we want to believe someone was smart, then a single letter of recommendation may suffice; but when we don’t want to believe that person is smart, we may demand a thick manila folder full of transcripts, tests, and testimony.
Precisely the same thing happens when we want or don’t want to believe something about ourselves. For instance, volunteers in one study were invited to take a medical test that would supposedly tell them whether they did or did not have a dangerous enzyme deficiency that would predispose them to pancreatic disorders. The volunteers placed a drop of their saliva on a strip of ordinary paper that the researchers falsely claimed was a medical test strip. Some volunteers (positive-testers) were told that if the strip turned green in ten to sixty seconds, then they had the enzyme deficiency. Other volunteers (negative-testers) were told that if the strip turned green in ten to sixty seconds, then they didn’t have the enzyme deficiency. Although the strip was an ordinary piece of paper and hence never turned green, the negative-testers waited much longer than the positive-testers before deciding that the test was complete. In other words, the volunteers gave the test strip plenty of time to prove they were well but much less time to prove they were ill. Apparently it doesn’t take much to convince us that we are smart and healthy, but it takes a whole lotta facts to convince us of the opposite. We ask whether facts allow us to believe our favored conclusions and whether they compel us to believe our disfavored conclusions. Not surprisingly, disfavored conclusions have a much tougher time meeting this more rigorous standard of proof.

It takes much more evidence – in fact, it’s got to smack us in the face – for us to believe something that we disagree with at our cores. And only a smidgen of evidence to keep us clinging to our own misbegotten notions. The low-fat guys (and gals) for all the reasons that Taubes lays out are convinced beyond any doubt that reducing the fat content of the diet will improve health. I doubt that their minds can easily be changed, no matter how much contrary evidence is thrown at them.
The great physicist Max Planck once wrote:

An important scientific innovation rarely makes its way by gradually winning over and converting its opponents: it rarely happens that Saul becomes Paul. What does happen is that its opponents gradually die out and that the growing generation is familiarized with the idea from the beginning.

At least the nice thing about the low-fat-ophiles is that if they follow their own dietary recommendations the day they lose their influence may come earlier than predicted by the actuarial tables.
*If you want to hear an absolutely fabulous rendition of Strawberry Fields Forever you should get the Beatles Anthology 2 and listen to the first and second cuts on the #2 CD. It’s John Lennon doing first a demo version of the song then on cut #2 a much, much better (in my opinion, anyway) version of the song than what they ultimately came out with.