The eagle has landed…or hasn't. 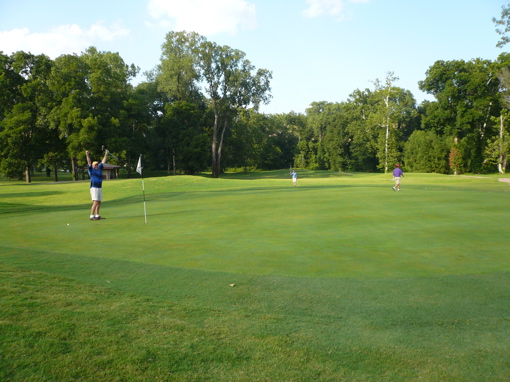 Rebsamen Golf course, 14th green, tee box 211 yards back in the dark spot in the woods.
I don’t think I’ve ever had as wide a temperament swing as I had in the 24 hours between this past Monday and Tuesday.
On Monday afternoon I played golf with my son Dan, MD’s nephew Chris, and a friend of Chris’s. We played Rebsamen, a public course in Little Rock where I played some of the first golf I ever played. It was hot and humid – a typical Arkansas afternoon in the early summer. I wasn’t used to the greens, which were kind of shaggy, but I was still playing pretty well. I was 6 over par as we came to the 14th hole, a 211 yard par 3. I used a 19 degree utility club and smoked the ball right toward the middle of the green. This particular green is elevated a little, making it difficult to see where the ball actually hits, so I didn’t actually see where it landed.
We drove our carts up to the green (one would have to be insane to walk and carry a bag in that kind of heat) and I didn’t see my ball. I figured I had knocked it through the green and off the back side. I jumped out of the cart with my sand wedge to chip it back on with and my putter. I looked around the back of the green in the rough, and when I couldn’t find a ball anywhere, I walked to the flag and looked in the hole. My ball