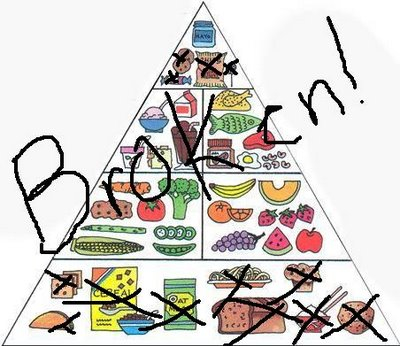 I got an email today about the upcoming 2010 USDA Nutritional Guidelines and Food Pyramid from Richard Feinman, Ph.D., who asked me to pass it along to the readers of this blog. The US Department of Agriculture updates the nutritional guidelines every five years – the last time was in 2005. You can find the link below to get the executive summary of the 2005 guidelines. In a few days the scientific group that works on these guidelines will be selected. Please write and voice your opinion that scientists who are experts in the low-carb arena should be members of this panel.
A few years ago I was on the O’Reilly Factor on Fox News (I don’t know how to get the tape of the show. If anyone knows how, please give me a heads up, and I’ll get it and post it) discussing the Nutritional Guidelines and the Food Pyramid. I said my piece, and Bill O’Reilly said something along the lines of: Ah, Doctor, who cares what the guidelines say? Nobody pays any attention to them anyway.
I explained that although he may not pay attention to them, plenty of other people do. The law that established the guidelines mandates that every bit of food or money for food that the government doles out has to follow the Nutritional Guidelines. Approximately 54 million people are fed daily by the government, and they all have to be fed according to the guidelines. Who does the government feed? The military, people in the prison system, school lunch programs, numerous people who receive commodities from Uncle Sam, Federally funded daycare centers, the list goes on and on. So the Nutritional Guidelines are not a meaningless, harmless little bit of government doodling – they are of great importance. It would be nice to see them move away from a diet that composed primarily of carbohydrate. The only way this will happen is to get some low-carb advocates on the panel.
Here is a copy of the email. Due to my computer ineptness I couldn’t get it to copy over with the links included, so I stuck them in below. 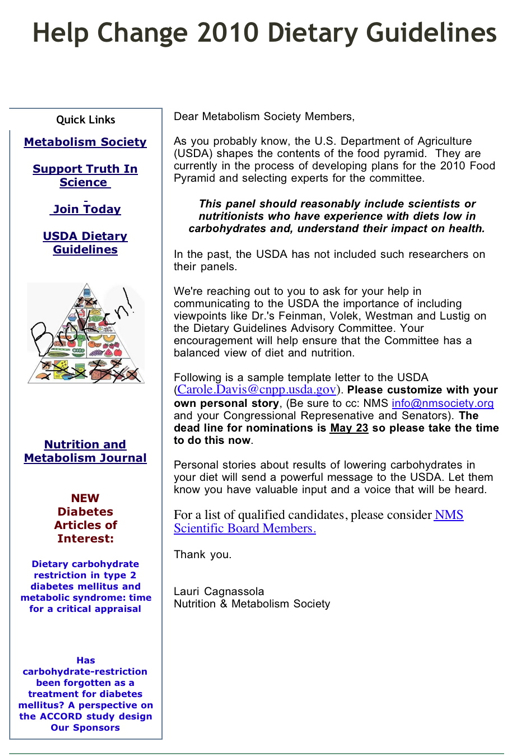 Dear Ms. Davis:
I am writing you about the recent announcement about the establishment of the Dietary Guidelines Advisory Committee for the 2010 Food Pyramid. I understand that the selection process is currently underway to determine what voices will be part of the discussion about the framework for the American diet. Some aspects of the current food pyramid are not a reflection of the needs that most Americans like myself have in order to maintain health. I encourage you to ensure that researchers who have performed extensive studies on the benefits of adjusting variables in the diet, like Dr. ___________ be included on the panel.

I have many reasons for wanting to make sure that the panel includes experts on the science behind different kinds of diets, such as diets low in carbohydrates.
[insert your own personal story – 1 or 2 paragraphs – about the results you have achieved by lowering the carbohydrates in your diet. Write about how these results have made you feel. What health effects have you seen?]