Is your doctor superior or inferior?

Superior doctors prevent the disease.
Mediocre doctors treat the disease before evident.
Inferior doctors treat the full-blown disease.
— Huang Dee Nai-Chang—
(2600 BC 1st Chinese Medical Text)
Truer words were never spoken. While contemplating these words, let’s take a look at what is important to our ‘superior’ mainstream doctors of today in the field of diabetes treatment. Below is a copy of an email I received today from Medscape, the folks who are kind of the WebMD to MDs. (I posted on another email from Medscape a few days back – the one with the annoying video of the two doctors telling how patients should take charge of their own health.) 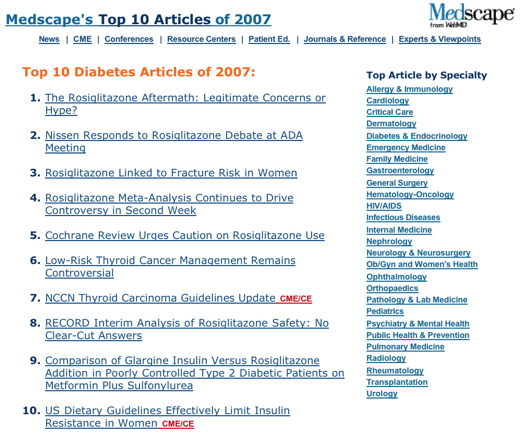 Read the list of the top 10 articles that were of most interest to physicians taking care of diabetic patients in 2007.
How many of these top 10 articles had to do with preventing diabetes and how many dealt with treating diabetes? Nine out of the ten deal with treatment or treatment failures or side effects of various treatment regimens for the full-blown disease. Only one, the last one, deals with any kind of nutritional issues. And that one references a paper published in Diabetes Care that shows that following the 2005 U.S. Dietary Guidelines (low-fat, high-carb) may be effective in reducing insulin resistance in women but had no effect in men. So the only preventative paper that all these ‘superior’ docs were interested in reading was one that basically showed that the diet most of them wholeheartedly believe in was minimally effective in women and not effective at all in men.
I’ve been in practice for a long, long time and have taken care of many, many diabetic patients, and I can tell you that there is no more single effective remedy for these patients than a low-carbohydrate diet. There is no medicine (aside from injectable insulin) that reduces blood sugar as effectively as simply avoiding carbohydrates. Which make sense when you think about it. Diabetes is a disease of too much sugar in the blood. Why would anyone want to treat it by adding more sugar to the already too-high levels. But most of the physicians who read these top 10 papers don’t think that way – they are so afraid of fat that the only place left for them to go with diet is in the direction of more carbs. And, as a consequence, ever increasing dosages of various blood-sugar-lowering medicines.
I may take the time at some point to post the top 10 papers of 2007 that would most help doctors actually benefit their patients with diabetes, obesity and the rest of the metabolic syndrome. But not right now. MD is hounding me to come help her pack. We fly out of here to New York at the crack of dawn tomorrow.
I’ll post as much as time allows on this busy trip.